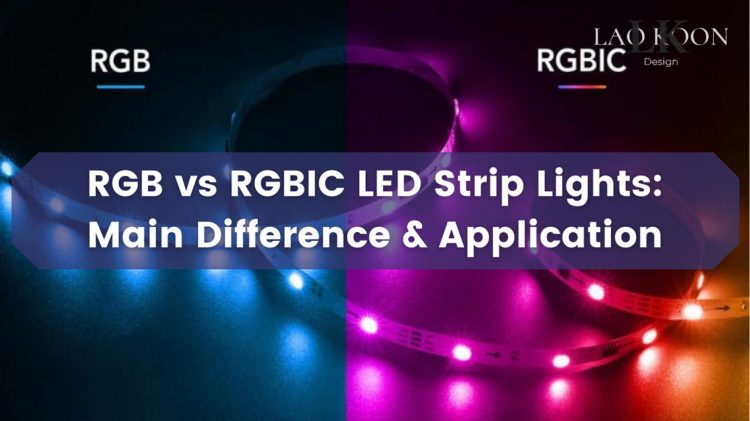 As RGB technology advances, it’s becoming increasingly crucial for everyone to understand the distinctions in their buying products. So, for today’s talk, we’ll look at the critical distinctions of RGB vs RGBIC, as well as the indications for use, the reasons for the differences, and perhaps more!

Non-addressable RGB refers to an RGB LED light strip in which each LED chip is not controlled independently. You can’t tell a particular LED chip to switch on or change color on its own.

These LED strips were quite popular a few years ago, but ARGB strips have become much more popular as technology has evolved. You might not even need the added benefits of ARGB, even though the effects aren’t as cool (RGBIC). In that instance, non-addressable RGB lights are not only less expensive, but they may also be more dependable.

An RGBIC is an RGB LED strip that can be addressed. Addressable RGB strips allow you to control each LED chip entirely independently of the others.

Developers can use this capability to build fantastic lighting effects embedded into the strips. They may also provide you with the option of creating your own.

RGBIC LED Light Strips are ideal for lighting projects that call for various creative effects. For example, if you want your lights to flash in time with music, a fully RGBIC system will look much better than one that isn’t. If you’re using an LED light strip to create a backlight effect (like behind a TV), you may only need one solid color at a time.

Hundreds of color options are available with intelligent RGB LED strips, often known as color-changing strip lights. RGB LED strip lights to have a DIY color feature that allows you to pick your favorite color.

Can you cut the Govee LED Lights?

Yes. If you want to cut Govee Lights, make sure you have the proper LED Strip. It is possible to cut RGB LED Strips. This is because they do not contain an IC chip. That is, they can be severed in particular places and still function. They are, however, the type of lights that cannot be several colors at the same time. The RGBIC Strips, on the other hand, can’t be cut because they have an IC chip, and the lights won’t work if you do. As a result, there are no cutting lines on this particular model.

RGB vs RGBIC: What’s the Difference?

***Watch video for more details about RGB vs RGBIC vs RGBWW

When to Use RGBIC Instead of RGB

#1. Bias LED Lighting for Behind TV

It’s straightforward to install LED lights behind your television. If you genuinely want to push RGBIC technology to new heights, Use it in conjunction with your television.

RGBIC can significantly impact your movie or sporting event viewing experience. Not to mention that it can aid in the reduction of eye strain.

You can have the colors on your TV relayed to your strip lights using a small camera positioned at the top or bottom of your TV. For example, depending on what’s on the screen, one side could be green, and the other could be yellow.

It takes some effort to get the little camera used for RGBIC strip light calibration to function correctly, but it’s an excellent choice for those of you who enjoy immersing yourself in your favorite Netflix series.

This is going to sound completely insane. However, certain apps allow you to input a photo and have your LED RGBIC strip lights recognize and show the colors in the image.

Lights may communicate with your music. Your rhythms can brighten up the atmosphere and make it more beautiful. There is a little pinpoint mic on the control box of some models, such as the Govee H61251. The latency is virtually non-existent, allowing you to see the music beat sync with the pulse and color of the lights.

Can You Cut RGBIC Strip Lights?

RGBIC’s ability to have multicolor strip lights in part simultaneously is precisely what we require.

RGBIC, on the other hand, precludes us from doing one of the things we love about strip lights: cutting them.

Cutting the RGBIC strip light prohibits it from running numerous colors throughout the roll, which is a huge disappointment.

Run a standard RGB strip with varied mode control settings as an option. You may sift through various lights this way. Yes, it won’t look nice, but the effect will be identical.

So, Is RGBIC Better Than RGB?

The answer is dependent on how you want to use the light.

RGBIC is far superior for individuals seeking color and a pleasurable lighting experience.

To have complete control over an RGBIC strip light, you must download the associated app. You’ll be at a significant disadvantage if you don’t.

However, if your project requires more customization, I recommend using a regular RGB strip light. Standard rolls make connecting several LED strip lights easier since they may be cut to size.

Whether you choose Govee Smart Lights’ RGB or RCBIC LED strips, you will receive a high-quality product and have a lot of fun with either.

Both have advantages and disadvantages, but that should not deter you from acquiring either, mainly because they are inexpensive. So much so that you might buy one of them and still not be able to afford the other brands.