LED Load Resistor: All to know about the important part for LEDs 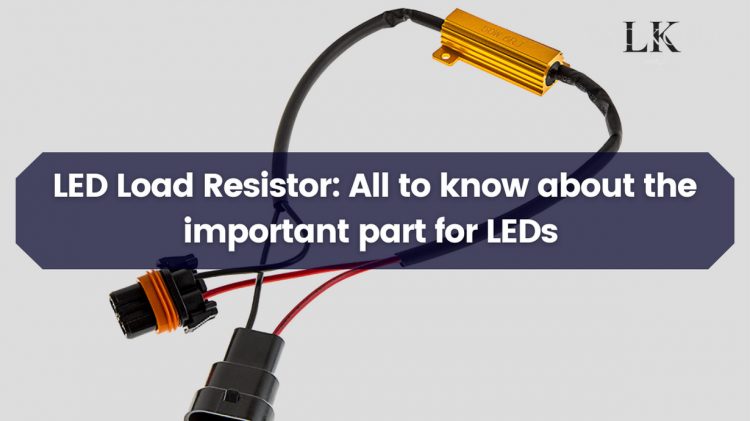 Resistors are probably familiar electronics to everyone. But do you know how many types of resistors there are and how does the LED load resistor work? Let’s find out now in this article!

What is a resistor?

A resistor is an electronic component that limits or regulates the current in an electronic circuit. Resistors can also be used to provide the desired voltage to an operating device such as a transistor. The unit of resistance is Ohm (read as Oh).

All resistors can be classified into four main groups:

Each group, each type has its advantages and disadvantages compared to the others. Excluding all categories would make the content of this section very large so I will limit it by popularity and intended use.

Carbon resistors are the most common type of overpressure resistors. Carbon resistors are cheap general-purpose resistors used in electrical and electronic circuits. The resistive component is composed of a mixture of fine carbon or graphite dust (similar to lead in pencils) and non-conductive ceramic (clay) powder to bind it all together.

The ratio of carbon dust and ceramic determines the resistance value. The higher the carbon ratio, the lower the impedance and vice versa. The composite is molded into a cylindrical form with metal wires or conductors attached to each end for electrical connections, then covered with external insulation and color-coded marking to indicate its resistance value.

Carbon composite resistors are low inductance low to medium power resistors suitable for high-frequency applications but they can also be noisy and unstable when hot. Composite carbon resistors are usually marked “CR” (e.g. CR10kΩ) and marked E6 (tolerance ± 20%), E12 (± 10%) and E24 (± 5% tolerance) with power from 0.250 to 5 Watt.

Because the manufacturing process of carbon resistors has a very large tolerance, for jobs that need high and accurate resistance values, people will replace them with film resistors.

“Film resistor” is a general term that includes various types of metal film, carbon film, and metal oxide film resistors, usually made by introducing pure metals (such as nickel) or oxide films (such as oxides of metal). tin) into an insulating ceramic rod.

When inserted, a laser is used to precisely cut a torsion spring in the membrane. Cutting the film has the effect of increasing or decreasing resistance, much like making a coil of wire from a long, straight wire.

This manufacturing method produces resistors with smaller tolerances (1% or less) than carbon resistors. Resistor tolerances are expressed as a percentage, for example, 5%, 10%… Membrane-type resistors also have much higher values ​​than others and values ​​can exceed 10MΩ (10 million Ohm). ).

A thick film resistor is produced by introducing a thicker layer of ceramic and metal onto an aluminum ceramic substrate. Metal-ceramic resistors have similar properties to metal-film resistors and are commonly used to make chip-chip resistors, high-frequency resistors, and PCBs. This type has good temperature stability, low noise, and good voltage level but low surge current properties.

Another type of resistor, known as a coil resistor, is made by wrapping a thin metal wire (Nichrome) or similar wire into an insulating ceramic layer in the form of a torsion spring similar to the film resistor above.

This type of resistor is usually only a very low value (from 0.01Ω to 100kΩ), suitable for use in measurement circuits and Wheatstone bridge-type applications.

This type can also be used for much higher currents than other resistors of the same value with capacities over 300 watts. High power resistors are molded or pressed into an aluminum heatsink body for good heat dissipation

Another type of winding resistor is the power winding resistor. These are high power, high-temperature non-reactive resistors and are typically coated with a glass or glass epoxy enamel for use in DC/servo motor control and dynamic braking applications.

Non-inductive resistance wire is wound around a ceramic or porcelain tube coated with mica to prevent the alloy wires from shifting when hot. Winding resistors come in many varieties and one of the main uses of a winding resistor is to convert current passing through it into heat with energies up to 1000 watts.

Since the wires of the winding resistor are wound into a coil inside the resistor body it acts as an inductor making them both inductive as well as resistive. It then generates a new impedance (Z) for the AC circuit.

The use of a resistor in an electrical or electronic circuit is to “obstruct” (hence a resistor), to regulate or establish a current through it using the conductive materials that make up the resistor. Resistors can also be connected in series to make a network of resistors that can act as voltage reducers, voltage dividers, or current limiters in a circuit.

The resistor is called a “Passive Device”, as it does not contain or amplify voltage but only reduces voltage or current passing through it resulting in electrical energy being lost in the form of heat.

There needs to be a voltage difference between the two resistors for the current to flow. This difference helps to balance the lost energy. When used in DC circuits, this difference, also known as potential difference, is measured across the terminals of the resistor as current flows.

Most types of resistors are linear devices that produce a voltage drop when current flows through it and obeys Ohm’s Law. Different resistor values ​​produce different current or voltage values. This is very useful in electronic circuits, when we want to regulate current or voltage we just need to adjust the resistance, we can create a voltage to current converter and current to voltage.

There are thousands of different types of resistors and are manufactured in a variety of configurations depending on their specific characteristics and accuracy to suit certain areas of application, such as high stability, high voltage high, high current, or general-purpose resistors.

Resistors usually only have a single resistance value, say 100Ω, but variable resistors (rheostats) can adjust the resistance between 0 and its maximum value.

Resistors operate on the principle of Ohm’s law, this is a law that tells about the dependence of the amperage of voltage and resistance. The content of the law says that the amperage passing through 2 points of a conductor is always proportional to the potential difference passing through those 2 points, with a conductor whose resistance is a constant, we have the equation Mathematically describes the relationship as follows:

Besides, the resistance also depends on the relationships related to the length such as:

Where is the output resistance depending on the material

L is the conductor length

The cross-section of the conductor is denoted by S.

The unit of resistance is denoted R.

***Refer to more: Line Voltage vs Low Voltage: Which is the best for your space?

When resistors are connected in series, the current flowing through each resistor in series and the total impedance Rt of the circuit must be equal to the sum of all the individual resistors added together.

For example, we have 3 resistors connected in series with values ​​of 1kΩ, 2kΩ, and 6kΩ respectively. By taking the individual values ​​of the resistors in the example, the total equivalent resistance or Req is calculated as:

So we can replace all three individual resistors above with just a single “equivalent” resistor of 9kΩ value.

Where four, five, or even more resistors are connected in a series circuit, the total impedance or equivalent of the circuit, Rt will still be the sum of all the individual resistors connected, and the more resistors added to the series, the larger the equivalent resistances (regardless of their value).

Total resistance is often referred to as Equivalent Resistance and can be defined as a single value of resistance that can replace any number of resistors in series without changing the values ​​of current or voltage in the circuit. Then the equation to calculate the total impedance of the circuit when the resistors are connected in series is:

The formula for the total voltage in a series circuit is the sum of all the individual voltages added together:

In the previous series resistor network, we saw that the total resistance, Rt of the circuit is equal to the sum of all the individual resistors added together. For parallel resistors, the equivalent circuit resistance Rt is calculated differently.

Here, the reciprocal values ​​(1/R) of the individual resistors are added together:

The equation given to calculate the total current flowing in a series of parallel resistors is the sum of all the individual currents added together:

Parallel resistor networks can also be referred to as “current dividers” because the source current divides between the different parallel branches. So a parallel resistor circuit with N networks of resistors will have N different current paths while maintaining a common voltage across itself. Resistors in parallel are also interchangeable without changing the total impedance or total current of the circuit.

What is a LED load resistor?

LEDs are simply understood as light-emitting diodes. LEDs will not limit the current passing and will not adjust the current. However, if the current passes through continuously with high intensity, the LED will soon fail. So we need to use a resistor to connect the led in series. We call it the LED load resistor.

How to calculate LED load resistor?

Currently, to calculate the LED load resistor, you do not need to apply cumbersome formulas but can use the software available on the phone, Led Resistor Calculator. This application you can download on CH Plays or App Store. Usage is as follows:

The software will return the LED’s resistance with the big blue number above. At the same time, there are suggestions for suitable resistance and power values in the yellow letters below.

Hopefully, with this article, you will have more knowledge about resistors and LED load resistors. When buying, choose a quality type to avoid electrical problems.