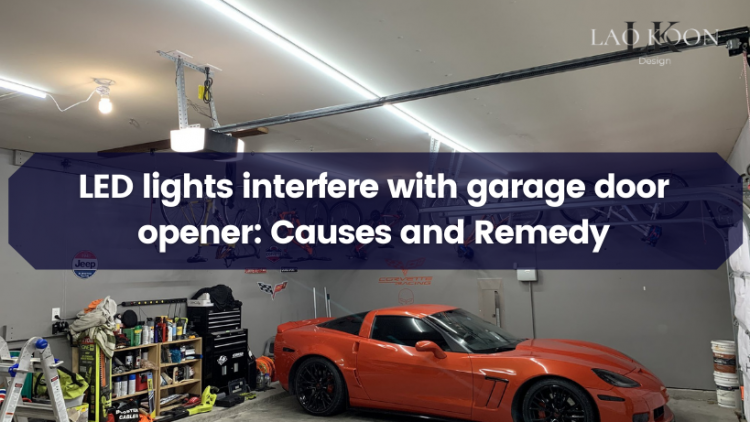 LED lights are popular among the technologically adept. Assume you enjoy having the latest devices or are just aware of how technology may make your life simpler. In that scenario, you’ve either already installed or are going to install LED lighting in your home.

The same is true with garage door openers. Why have a manual garage door when there is a simple technological alternative to automate it?

It’s considerably easier and allows you to accomplish it without getting out of your car, saving you time.

Is it true, however, that LED lights and automated garage door openers do not always get along?

In this piece, I’ll show how to choose the best functional option for your house – and avoid reverting back to old-fashioned incandescent bulbs.

How do LED lights work?

Before we proceed to determine the problem and devise a remedy for the LED bulb interfering with the garage door opening, we should first understand how LEDs operate.

Because of their energy efficiency, LED light bulbs have grown in favor of homes. Pulse-width modulation is responsible for this energy efficiency. LED bulbs appear to be a continuous stream of light, however, with pulse-width modulation technology, the light flashes 15 times per second. Control circuits inside the bulb run this planned flash and rely on a frequency between 30 and 300 Megahertz (MHz) (MHz).

Why do LEDs interfere with garage door opener?

Following that, you must comprehend how a garage door opener operates. They work on a circuit that contains the mechanism for opening and closing the door as well as a receiver.

This receiver employs radio wave technology, and when you push the button on your door opener, it detects that the door has to be opened or closed.

It sounds simple enough, but radio signals are subject to interference. If you’re over 30, you’ll recall the days when your vehicle radio and cellphone were warring and making awful sounds.

LED bulbs emit a small amount of radio noise as well. It’s not the physical diode itself that generates the signal but the electronics within, including the transformer, which lowers the AC current down to DC to a safe working level.

Some high-end bulbs have shielding in place to prevent this noise from spreading, but many don’t. The problem is then often amplified by the wiring of the circuit, which boosts the radio signal.

When this happens, the additional radio waves might confuse and obscure the door opener signal, preventing the door from opening when you jab at the buttons.

Put simply, garage door openers function by transmitting radio waves, much like a remote-controlled automobile. LED lights have drivers that generate a field that interferes with the garage door, preventing it from opening.

Garage doors use frequencies ranging from 28 to 360 MHz Because these two devices utilize frequencies that overlap, they may interfere with one another.

What should be simple technology to make your life simpler can soon become irritating.

If you’re looking for the technical specifics on how much radio interference different bulbs may create, this page from LED benchmark includes several tested samples of A19, MR16, and tube LEDs.

There has been a rise in RFI emissions, which has even interfered with neighboring digital TV reception for not just the owners but also the neighbors!

How do you repair a garage door opener interference?

In principle, resolving the issue is straightforward, but in fact, it might be difficult. You must either use shielding wires or a ferrite bead to block the interference.

Shielding the wire is a difficult task.

You may either replace the present wiring in the fixture or install mesh-lined tubing to block the RFI signal. To do so, you’ll need access to all of the cables around the fixture.

Because most of the tubing must be slipped over the cable, you’ll need to disconnect the wiring to add it.

It’s a huge job that can be hard to do – furthermore, you’re working with metal braided mesh, so make sure all electricity is turned off before you start tinkering with the wires.

If you are not cautious, it will conduct the current.

A ferrite bead is a somewhat more accessible choice. These ingenious tiny gadgets employ a ferrite core to isolate RFI signals, reducing them down to prevent interference.

They’re a little black cylinder that’s generally near the plug on a wire, and they’re frequent on laptop chargers.

Because the majority of the RFI signal increase occurs on the wiring rather than the LED light, you may simply insert ferrite beads on the wires to reduce the additional noise generated by the cables.

They are simple to install – simply clip over the wires – and inexpensive. You want to put them on the power cord that is closest to the equipment that is generating the interference — in this case, the light fitting.

The bead stops or dampens the signal after it has been generated, which occurs when the power is stepped down inside the bulb rather than before it. It should be installed as near to the fitting as feasible on the negative cable going from the bulb.

Also, you can refer to these troubleshooting steps if your garage door isn’t opening and shutting like it should when you use the remote control.

– Look into the maker of the LED bulb. The vast majority of LED-related garage door interference is caused by low-cost, imported LED lights. Replace low-quality, foreign-made LED light bulbs with higher-quality LED bulbs. If it does not resolve the problem, you may always return the replacement bulbs and receive a refund. Genie LED lights are purposefully engineered to avoid interfering with garage door signals. They are a little more expensive, but they are definitely worth it.

– Replace your garage lighting fittings. The problem might be caused by LED lights in current garage door light fixtures. Change their lights as well to see if that helps. Alternatively, you may need to replace the garage lights with more modern choices.

Is it possible for many landscape LEDs to interfere with garage door openers?

Unfortunately, radio interference can be caused by more than simply LED lights within the garage that are connected to the same circuit as the door opener. If you have LED landscape lights on your driveway, you may experience the same issue.

One LED landscape light on the driveway that isn’t too near to the door opener receiver is unlikely to produce enough interference — radio waves will flow in all directions and won’t be strong enough to interfere with the remote transmission.

However, many individuals install several landscape lights to completely illuminate their driveway. And the combined noise can completely block or interfere with the signal when you try to open or close the door, either continuously or periodically – which can be quite annoying.

The answer is the same – and if you have several lights, the simplest approach is to buy a multipack of ferrite beads (Amazon) and put them to the wiring surrounding each fitting rather than insulating the entire circuit.

Putting a ferrite bead on either side of each light fitting will still be discrete, plus it will ensure that any radio wave signal is muted, preventing your opener from malfunctioning.

If the opening system has traditionally functioned properly, but after switching to LED illumination, it begins to act unevenly, the light bulb is most likely the source of the problem. We can therefore conclude that the LED lights interfere with garage door opener.

A little shielding within the LED can prevent most of the Radio Frequency Interference (RFI) from escaping and allow your garage door to function normally.

As you can see, LED light interference is not that hard; we simply need to understand how it all works and then do our best to solve the problem.

If you are unable to address the problem, like with anything else, bring in the professionals since you do not want to be electrocuted while attempting to fix something difficult yourself.

LED lights have been available since the late 1960s, but like many other things, they have improved and become more affordable. So, there’s no reason why your garage shouldn’t be well-lit without interfering with the garage door functioning.

Have your LED lights ever created radio interference issues? Did you replace them, or were you able to repair them? Please let me know in the comments section below. Thank you for reading!