LED Light Exploded: Find Out 2 Main Reasons Behind This Issue 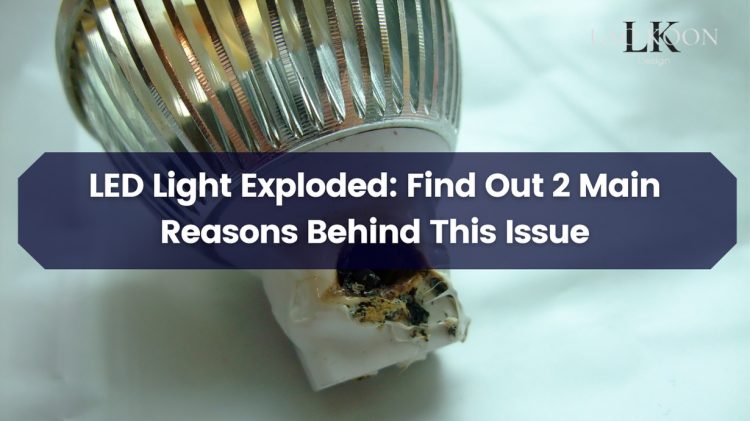 LEDs are well-known for their extended lifetime. However, while it may take years for your LED bulbs to deteriorate, certain awful things may happen to them right now, such as a bulb explosion.

LED light exploded pretty unlikely. However, there are a few instances where this occurs. Electrical and thermal stress produced by malfunctioning capacitors, voltage spikes, and insufficient heat dissipation might cause your bulb to blow out.

Why do light bulbs explode?

When light bulbs grow too hot, they usually explode. When a filament within a glass vacuum emits light, it generates a lot of heat. When exposed to excessive heat, the sealant surrounding the bulb’s base melts, allowing the gas to escape. The pressure difference within the bulb causes a bulb explosion.

This is not the case with LED lights, which emit light differently via a semiconductor. As a result, an LED bulb exploding is exceedingly unlikely.

Can “Popping” Sound Be Considered As Explosion?

When you hear the term “explosion,” you usually envision a massive bomb with smoke and fire. However, this is not the case with LEDs.

When an LED explodes due to electrical or thermal stress, there will most likely be a loud “popping” sound with broken components flying throughout the room.

Essentially, pressure builds up until the LED can no longer withstand it. It must be released in the form of sound energy (the popping) and kinetic energy (the broken parts flying around).

On the other hand, LEDs are composed of shatterproof glass or epoxy resin, as opposed to traditional bulbs. When an LED explodes, the bulb may fracture, but unlike glass, it is unlikely to shatter into millions of tiny, sharp shards.

This is beneficial for two reasons:

Can this popping sound, however, be correctly described as an explosion? According to Dictionary.com, an explosion is “an act or occurrence of exploding; a forceful expansion or bursting with noise,” which is precisely what occurs when pressure builds up within an LED.

***Refer to more: Can Led lights catch on fire? LED Knowledge you should know!

Because LED strip lights and LED bulbs use the same technology, they will explode under the right conditions.

LEDs are unlikely to become hot enough to cause an explosion in regular operation. However, they might overheat if utilized for an extended period, especially if the components are poor.

LED light exploded: 2 reasons behind it

The two major reasons for an LED bulb explosion are electrical stress and thermal stress.

#1. What is electrical stress?

A tiny electrical circuit is located at the back of an LED bulb. The LED requires 2 to 4 volts of power to operate. An outlet on a domestic wall, on the other hand, delivers an average voltage of 120 V. As a result, this presents a dilemma.

Many LED bulbs use a capacitor to reduce the voltage to a tolerable level before it is supplied to the individual LED components. The capacitor is extremely pressured in this type of environment and might fail in rare situations.

In a voltage fluctuation, the capacitor may mistakenly allow the total current to pass through the LED. Even if it just lasts a fraction of a second, this will cause the LED to burst. This is referred to as an electrical overstress. It frequently happens when the LED’s capacitor is of poor quality. Cheap LEDs made of low-quality materials cannot withstand electrical surges. In this case, the capacitor failed.

#2. What is thermal stress?

Thermal stress is caused by the LEDs’ inability to dissipate heat. This occurs when an excessive amount of electrical current is sent through the LED, even if just for a fraction of a second.

When a bulb retains too much heat, the structure of the semiconductor material expands if the heat is not dissipated. Because the bulb does not grow, pressure builds up inside the LED, causing a short circuit. The bulb then burns out and bursts.

All of the energy saved up by pressing on the inside of the bulb is quickly dispersed as sound waves and kinetic energy. It makes a popping sound and scatters fragments of plastic about the room. LEDs are harmed by heat. This is why most LED fixtures have heat sinks and other heat dissipation mechanisms.

#3. What happens when LEDs explode?

Whether the explosion is caused by electrical or thermal stress, you will hear a loud popping sound and shattered bits of plastic flying everywhere.

The good news is that the majority of LED lights are constructed of epoxy resin or shatterproof glass. Although the bulb splits, unlike glass, it does not shatter into sharp fragments. This makes it much safer and more straightforward to clean up.

***Refer to more: 6 Common Problems With LED Lighting & How To Fix Them

Can LEDs explode in enclosed fixtures?

Because of the heat that LEDs emit, they might pose a potential hazard when employed in enclosed fixtures.

#1. What is an enclosed fixture?

An enclosed fixture, as opposed to an open-air institution, allows the light to breathe. The light source in an enclosed fixture is contained in a plastic or glass container with no ventilation. This is usually used to protect the circuit beneath or keep water out so that it does not become water damaged.

#2. Can LEDs explode in an enclosed fixture?

When there is a lack of ventilation, heat accumulates more quickly. If heat is not removed, the LED may fail gradually or explode due to thermal stress. The heat that does not spread returns. As a result, more heat is transferred via the LED bulb itself. Although the LED is unlikely to explode, it might overheat and lose effectiveness over time.

Do LED Lights Smell When They Burn Out?

LED lights, like any other burnt thing, have a noxious odor. The most familiar smell associated with LEDs is the burning out of plastic and electrical components.

If you smell burning plastic or electronic components emanating from your LED light, it’s likely that it’s overheated and going to explode. Please turn it off immediately and investigate the situation.

The most likely reason is one of the following:

Is it Safe to Leave LED Lights On for a Week?

LED lights may operate 24 hours a day, seven days a week, depending on the quality and manufacturer. LEDs generate less heat and so do not overheat.

However, like with other gadgets, it’s best to switch them off now and then if you’re not using them. It aids in extending its lifespan for long-term use.

You may take various steps before a light bulb burst to avoid causing harm to your property or yourself. Make sure that none of your lightbulbs are submerged in water. If you require a lightbulb in a high-humidity region, such as outside or bathroom, look for an outdoor or well-sealed bulb.

Although it may be tempting to buy cheap light bulbs, always attempt to get high-quality items. If your light bulb does happen to explode, wait a few moments before going to clean it up. This will allow the shattered glass to cool before you sweep it up. When cleaning up glass fragments, you must be extremely thorough. Broken glass may go a long distance, and you don’t want to cut yourself on any residual glass.

When subjected to excessive electrical or thermal stress, your LED bulb may burst. Voltage spikes or heat buildup can also cause this. LED light exploded more familiar with low-quality LEDs. Heat dissipation is well regulated in high-quality LED lights, making bulb explosions improbable. Even if LED bulbs fail in rare situations, they are still superior to incandescent lamps.