LED Energy Efficiency: Top Choice in Lighting for Every Space 2022 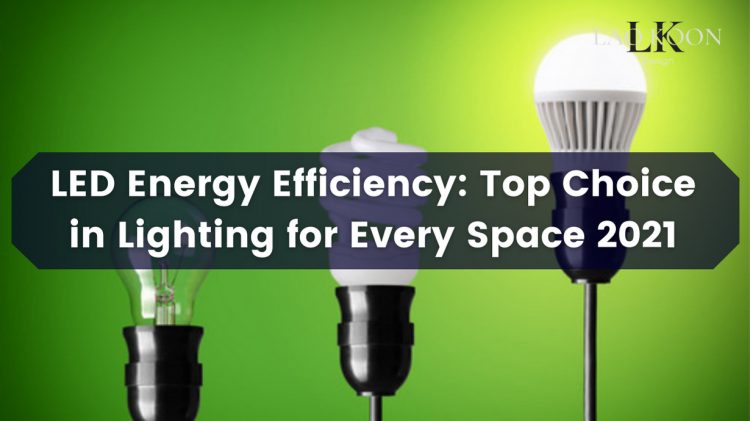 LEDs lighting is known as the best choice in energy efficiency. But, have you ever thought about how LED energy efficiency is? So, continue reading, or you might miss some interesting information!

The birth of LEDs

In 1907, British scientist H.J. Round invented the first light-emitting diode, then Russian scientist Oleg Vladimirovich Losev created the first LED. Still, this achievement quickly fell into oblivion when it was not known.

Not until 1961, two American scientists, Robert Biard and Gary Pittman, also discovered that GaAs emit infrared rays when an electric current is applied to them. Soon after that, they were granted a patent.

In 1962, the first red LED was studied by Nick Holonyak Jr. Then, in 1972, M. George Crawford was the one who invented the first yellow led bulbs 10 times brighter than the light of red and orange LEDs.

And it wasn’t until 1993 that the first blue LED light made from InGan was invented by a scientist named Shuji Nakamura working for Nichia Corporation. Then, people mix yellow light with blue light and add a layer of a compound called YAG to produce white light.

However, it was not until more than 10 years later that Nakamura was awarded the millennium technology award for the invention of this blue light led.

Polycarbonate prisms are preferred because they block light and are relatively easy to manufacture. However, the surface quality and shape of the prism are essential to ensure the propagation of light and limit losses in light output.

LED chip: As we learned above, this is the light-emitting part for the lamp.

Substrate material: Usually, a PCB metal core is used to mount LEDs. Besides providing a surface to mount the LED chip, the metal core also helps to transfer it to the heatsink with a larger contact surface.

Interface materials: Usually glue or grease. This part maximizes contact when attaching the surface layer to the heatsink to maximize heat transfer.

Radiator: There are 2 types of radiators. An active heat sink, usually a fan used to circulate air. Passive heatsinks use metal fins to dissipate heat. Active heat sinks are usually better at dissipating heat, but a copper heat sink is sufficient to keep the luminaire at its best operating temperature in most applications.

Features and luminous intensity of LEDs

The amount of heat generated during the lighting process of LED lights is not significant. So they do not cause an increase in ambient temperature. This is an essential factor to help LED lights save the most electricity.

High-pressure LEDs do not cause infrared or ultraviolet rays. With such convincing advantages for users, LED lighting is becoming the choice of many families and projects today.

For fluorescent or incandescent lamps, a light or strong impact will affect the bulb’s filament. So even if we don’t have any impact, it will also affect them. With LED lights, you are entirely assured. The light is emitted from the chips. Especially the outside of the lamp eyes is protected with a layer of tempered glass to help the lights resist the effects.

There is no need to wait for the light to flash, then light up when powered on with LED lighting. Utterly free of mercury and harmful substances, ensuring absolute safety.

The color of the emitted LED light depends on the material. For example, the red led light is emitted by materials such as aluminum, acetylene, gallium.

LEDs use semiconductors as the light source and are currently one of the most efficient lighting systems. The advantage of this type of lamp is that it does not contain mercury, has excellent light quality, and consumes less energy.

In detail, LED lights emit less heat than other lighting devices because they have a structure similar to a bulb. But without a filament in the middle, LEDs have a lower working temperature than fluorescent lamps from 13 – 250 degrees Celsius. As a result, LED lights also produce more light than other lamps.

LED lights do not contain harmful substances. In addition, they help reduce CO2 emissions by 80%. Due to those advantages, LED lights are beneficial to consumers’ health and friendly to the environment.

Moreover, LED lights are very safe for users, reduce the risk of fire and explosion, and do not cause eye strain. Because they minimize ultraviolet rays and infrared radiation.

The two-century dominance of the incandescent lamp invented by Edison today has been entirely replaced by new lamp technologies that are increasingly efficient in lighting and energy-saving.

The importance of LEDs is also increasingly being confirmed in research programs around the world. For example, the 2014 Nobel Prize in Physics was recently awarded to 3 co-authors, Isamu Akasaki, Hiroshi Amano, and Shuji Nakamura. Their contributions invent a much brighter blue LED light more energy efficient.

The growing need for a cleaner, safer energy source on a global scale is being emphasized. LED deserves to be future lighting technology which is believed to be dominant in the whole world lighting because of its efficiency and environmentally friendly.

Saving in lighting energy is because LEDs reduce infrared light emissions compared to those emitted by incandescent and fluorescent lamps, and the power of LEDs is lower than that of incandescent bulbs.

The power supply has a low voltage enough for LED lighting. This makes it easy to use LED lighting in outdoor environments by connecting an external solar source and is a significant advantage when using LED technology in remote or rural areas.

LEDs have a longer “lifetime,” typically 20,000-50,000 hours, about 5 times longer than other bulbs on the market. LEDs also have a significantly lower optical depreciation rate than other bulbs, around 2-5%/year compared to 12-15%/year for compact lamps and 25-40%/year for incandescent bulbs.

LEDs are different from standard lighting: They don’t burn out and stop working like standard lights. Moreover, the light diodes emit lower power levels over a very long period and become less bright.

In addition, LEDs are incredibly durable and built with sturdy components that are highly rugged and can withstand even the harshest conditions.

Because LEDs are resistant to shock, vibration, and external influences, they make excellent outdoor lighting systems for extreme conditions and exposure to weather, wind, rain, or even destruction.

LED lights are free of harmful chemicals. Most conventional fluorescent light bulbs contain loads of materials such as mercury that are hazardous to the environment. But LED lights contain no toxic materials and are 100% recyclable, and will help you reduce your carbon footprint by up to a third.

#4. Operating in too cold or too hot temperatures

LEDs light up instantly, and when powered on, this has significant advantages for infrastructure projects like traffic and signal lights.

In addition, LEDs can be turned off and on frequently without affecting the LED’s lifespan or luminous flux. In contrast, traditional lighting can take a few seconds to reach full brightness, and frequent switching on/off will significantly reduce operating life.

LEDs offer the most efficient lighting and lighting with an estimated energy efficiency of 80-90% compared to traditional lighting systems and conventional bulbs.

Hope sharings in this article will help you better understand LED energy efficiency. If you have any questions, please feel free to leave us your comment! Thanks for your time with us!