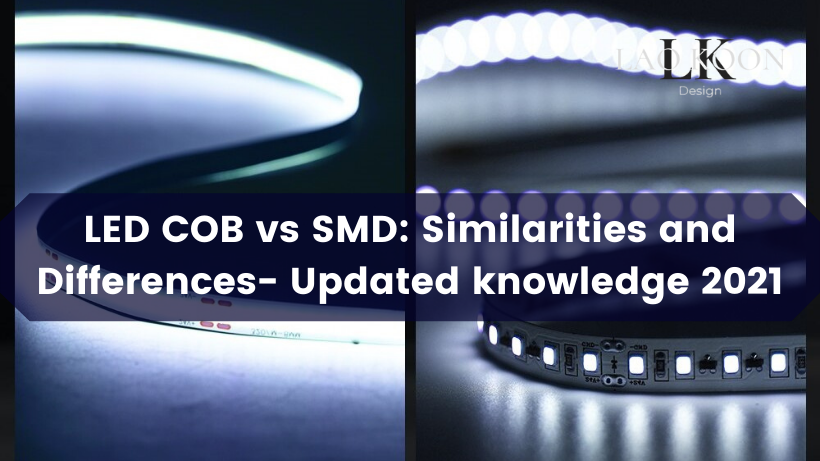 We all need a light to guide us through the dark and point it in the right direction. Therefore, choosing the right LED is very important. However, since LEDs have a 25 times longer lifespan and consume less power, different LEDs are more popular than traditional incandescent lamps.

LED COB vs SMD are what they are and, of course, are perfect for you. Each design has its advantages and explains why you should choose between them for a particular application.

What is an SMD LED light?

SMD LEDs are the most common type of LED available in the lighting market. SMD stands for Surface Mounted Device. Its name origins from the fact that the LED chips of these LEDs are fused or permanently attached to an electrical circuit. These LED chips come in a variety of shapes and sizes. SMD LEDs usually include very complex designs, such as the 5mm wide SMD5050.

On the other hand, the width of SMD3528 is 3.5mm. SMD LED chips are tiny and often look like square flat chips. These SMD LED light chips are characterized by the number of diodes and their contacts.

These chips differ from standard DIP LEDs because they can only have two contacts. You can place up to three diodes on one chip, each with its circuitry. Each circuit has an anode and a cathode. That is, each chip has up to 6 contacts. This simple configuration of SMD LED chips makes it highly versatile. You can create chips that contain diodes in different colors of red, blue, and green. And with these three primary colors, you can make all the colors just by adjusting the output.

These types of lights are included in LED bulbs, an array of sunshine, and LED strips. The notification light of the mobile phone is also an SMD LED. SMD lights are very bright and range from 50 to 100 lumens per watt.

What is COB LED light?

This is one of the latest developments in LED technology and is the next step in energy-efficient lighting solutions. COB stands for Chip on Board, and like SMD, there are one or more diodes on the surface of the COB chip. A COB chip typically has nine or more diodes. COB LEDs also have a single circuit with few contacts, regardless of the number of diodes.

The COB LED has a simple circuit that makes it look like a control board. However, these lights have one run and two contacts, so you cannot use them to make bulbs or lights. In addition, more channels are needed to achieve the effect of the color change. Therefore, COB LEDs only efficiently provide single color light, but they are not very versatile. COB lamps are also known for their excellent thermal efficiency and lumen/watt ratio. This is due to the COB LED and the COB chip cooling board.

Previously, you could not use LEDs in heavy-duty applications such as spotlights and lights, but with the help of COB LEDs, the same was possible. COB chips can handle high flux light with very little power and therefore can produce very bright light. LEDs are used in applications such as cell phone flashes and camera lenses. The COB LED range is 80 lumens per watt.

SMD and COB LED chips have multiple diodes on the same surface. 2 LED chips for SMD and COB, including two contacts and 1 circuit. These two LEDs produce very bright light. These types of LEDs can be used in heavy-duty industrial applications such as spotlights and spotlights. Circuit design both are simple.

Both SMD LED, and COB LED types are very energy efficient. It is one of the main reasons LEDs are the preferred lighting medium over traditional filaments and other types of lighting. High lumens per watt means low power consumption and shows maximum efficiency.

Both LEDs offer a bright source. SMD LEDs produce 50 to 100 lumens per watt, and COB LEDs produce over 80 lumens. It means more brilliant light is constructed with lower wattage and power consumption. In short, LED lights make your home more optimistic and better. While COB is a better light source and can be used for focused lighting, SMD lamps are suitable for applications that need to produce wider beams and illuminate a larger area.

LEDs are known as a cost-effective method of lighting. Initial costs can be high, but it lasts longer than traditional lighting, making it the most affordable lighting solution available.

Cob is a surface light. Compared with SMD, the illumination is more uniform, and there is no halo, the angle beam of COB is large and easy to adjust, there is no spotlight or glare.

With SMD, The LED chip is conductive adhesive, attached to the lamp holder, and soldered to the same conductivity as the COB housing. After performance testing, it is epoxy-packed, split, cut, glued, and shipped to the shoe factory.

The LED chip in COB is directly fixed to the pad in the place of the bulb on the PCB by conductive adhesive and insulating adhesive, and the conductive performance of the LED chip is soldered. At the end of the test, the epoxy chip is encapsulated.

SMD: While the LED is working, it must be installed first and then fixed to the PCB by soldering.

COB: No assembly and re-welding process required. The COB light source is projected directly onto the lamp.

SMD Lamp Beads: The labor and manufacturing costs of traditional SMD lamp beads are about 15% of the cost of materials.

Based on the above points, what is the practical application of CMS and COB for LED lights? SMD LED due to the SMD package structure. COB has a long life at high temperatures and is suitable for high voltage street and industrial lighting.

All in all, the COB LED is a high-quality light source. This is because reflectors are used to provide focused and controlled lighting. It also doesn’t have the frosted lens that comes with the SMD LED. What was the result? You can expect cleaner, brighter light. This makes COB LED especially useful in high-end rooms. COB LED is known as Premium LED and gives a more architectural look. If you want to use the LED downlight for a long time, switch to COB. If you are moving to real estate investment, SMD will do the job.

The circuit can be designed according to your needs. Heat dissipation is more convenient and prevents distractions such as headlights and glare from combining the individual light source devices.

Why choose an SMD LED?

On the other hand, as mentioned above, SMD LEDs are a great choice if you want to prevent flooding in a large area. For example, you can use it in bathrooms, kitchens, and bedrooms. However, these lights shine brighter than the corresponding COB LEDs.

SMD is more flexible. The chip display is defined by the PCB layout and can be modified for different engineering solutions. The SMD light source has a broader illumination angle up to 120 ° degrees. The size and weight of the cover parts are about 1/10 of the normal plug-in functions. It has high reliability and strong anti-vibration ability. The failure rate of the welds is low, and the production efficiency is improved.

Some disadvantages of the two types

While all technologies have their advantages, they always have drawbacks. The list of pros certainly outweighs the most minor cons, but there are a few that can be listed as follows:

COB LEDs are efficient, but SMD LEDs have a higher efficiency level. This is due to the many lumens per watt produced. In other words, you can get more light with less energy. SMD LEDs also yield a wider beam of light. It means that the light does not require a large heat sink like COB LEDs.

Which is the brightest LED of SMD?

One of the most extensive improvements is that SMD projectors offer higher lumens with lower power consumption. They are more powerful and energy-efficient than older LEDs, with a maximum brightness of 50 lumens and 6W of power.

What is the best SMD chip?

The 3.5mm x 2.8mm chip is one of the most popular tips because it is reasonably priced and does not give much heat. These are significant advantages, but they can be more optimistic than 5050 tapes because they aren’t as bright as other chips unless used with 600 coils.

Through the information we share, both COB and SMD LEDs have their advantages and limitations. Therefore, when bringing LED COB vs SMD, we can hardly distinguish and choose. But there is an important thing when buying a product that you should learn as well as determine your needs to choose good and useful products!

How many Led lights for Garage? Best lighting guide [2022]