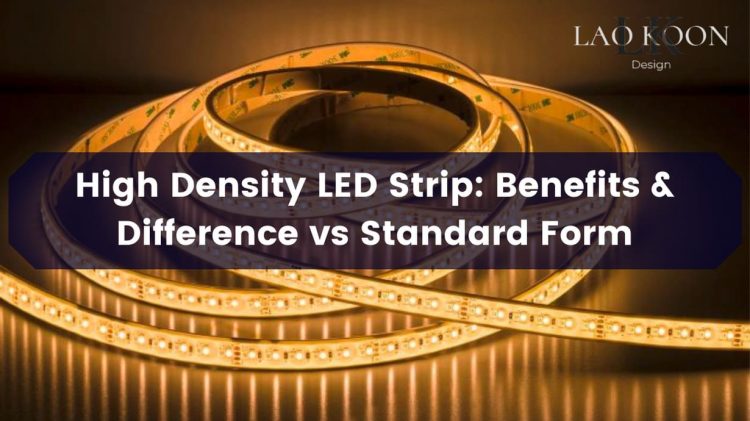 Do you desire a much brighter light output? Then you can’t afford to overlook high density led strip. When compared to standard density strips, high-density strip lights are a significant improvement. This is ideal for applications with higher ceilings, wide-open spaces that require more light to cover all areas, or if strip lighting is used as the primary light source.

The LED count is the total number of LEDs installed on an LED strip light product, typically per 5-meter reel. LED density, on the other hand, is typically expressed as the number of LEDs per square meter or square foot.

Both are simply numbers that will eventually tell you how many LEDs you will receive per unit length.

The difference between standard and high density LED strip

Higher density LED light strips are twice as bright. Because there are twice as many diodes, twice as much light is produced. However, there are some limitations to this, which we’ll go over later.

The effect of LED density

Because power draw and strip light output are usually proportional, the same logic that governs the effect of LED density on output also governs power draw and power supplies.

Because LEDs are the light-emitting foundation components of LED strip lights, the quantity of these components is critical in determining the overall strip light output of an LED strip.

Remember, you’re comparing cases where the LED is the same and the current draw settings are the same.

Individual LED performance should not be affected by LED density; rather, an individual LED’s lifetime is determined by its driving current and thermal performance.

Various factors may have an indirect impact on LED strip longevity as a result of changes in LED density.

To begin, if all other factors remain constant, a higher density LED strip will require more power supply. As a result, more heat is generated throughout the LED strip, raising the ambient temperature for all LEDs connected to the strip. This causes strip light degradation, which may be accelerated.

To make an informed decision, you must evaluate thermal and drive current metrics at the individual LED level and compare them to LED specifications.

Consider an LED strip that gets quite hot to the touch due to its high LED count, or a 30 LED per meter LED strip with 30 Watts per meter; a 1-watt LED on a flexible LED strip will struggle to dissipate enough heat.

The most serious issue that could arise as a result of insufficient LED density is light distribution. Because LEDs are separate point sources, depending on how they are mounted, the individual LEDs on an LED strip may produce a dotted appearance, also known as spotting.

What exactly is going on here? Consider a car’s headlights as an example. Assume you’re driving into your garage at night with your headlights on. Your headlights will first shine onto and illuminate the back of your garage.

As you approach the back wall, however, you’ll notice that the area directly in front of each lamp becomes brighter, while the periphery becomes darker. This is because you have two independent headlights that shine in opposite directions.

Because the LEDs on an LED strip are by far the most expensive component, understanding the amount per unit length is critical before purchasing and comparing prices.

You should now understand how LED density affects performance and be able to determine whether a higher LED density strip will benefit you and whether the extra cost is justified.

High-density LED strips are ideal for applications requiring a small amount of space. They don’t require large drivers and are ideal for confined spaces. They also have built-in thermal control, which aids in cooling the LEDs when they become overheated.

As a result, they are ideal for applications where space is limited. They also produce less heat, which is an added benefit. High-density LED strips, on the other hand, tend to run hotter than standard-density LED strips. However, the increased density is not in and of itself a bad thing.

High-density strips are more expensive, but they last longer and perform better. Aside from being more expensive, a single strip with a higher LED density is available. Also, keep in mind that the number of LEDs on a single unit length is not always the same. You can choose between 30 and 40 LEDs per meter.

High-density strips have the advantage of being waterproof and IP65-rated. They may also be watertight. This is a significant factor because it means that LED strips will last longer and perform better in their applications.

They can be used in areas where there is no shortage of water. You can also use these strips in your bathroom or kitchen if you don’t mind splashing water. For those with sensitive eyes, the latter may be a better option.

LED strip lights are far more efficient than traditional light sources in terms of energy consumption. They can save up to 18% more energy than comparable fixtures.

They are also more secure to use, even at higher densities. They are also less likely to cause health issues. Despite the fact that all light is harmful, low-density strips are a cost-effective and environmentally friendly option.

Aside from saving money, LED strips are an excellent choice for a variety of applications.

#4. Excellent on any surface

LED strip lights can be installed on virtually any surface. When putting together an LED strip, the wattage of each LED is the most important consideration. The more lumens required, the higher the wattage. This isn’t the only benefit of high-density LED strips.

Some LEDs have varying voltages, while others are more than twice as powerful. You can also arrange them in a row or a line.

LED strips are also reasonably priced. The first benefit is that they are less expensive per LED than traditional light bulbs. This is a great option for do-it-yourself projects. They can be used for a variety of purposes, such as interior and exterior lighting.

A wall, for example, can have up to 60,000 LED lights and still be a reasonably priced option. You can select the one with the highest density of the two. This type of high-density strip will be brighter, whereas the lower-density version will be less expensive.

High-density LED strips are the most cost-effective high-density lighting option. The average length of these strips is 5 meters, allowing you to install them in any space you desire.

It is possible to use a high-density LED strip as an accent LED strip light, but you should be aware of the technology’s limitations when installing the LED strip light. You must be cautious when choosing the best strip light for your project.

Is the density of LEDs high?

Which led strips contain the most LEDs?

This is entirely dependent on the dimensions of your project, but the higher the density of your strip, the more led chips it will contain per foot. If you have a low-density strip with a longer installation, that strip will technically have more LEDs even if it isn’t as powerful or bright.

Do LED strip lights to increase your electric bill?

When compared to traditional incandescent lights, LED strip lights consume less energy. The length of the strip light and its light density has a direct impact on consumption. On average, a standard 5-meter strip will cost less than $3 per year to operate.

Is it safe to leave your LED lights turned on at night?

Simply put, well-made LED lights are extremely long-lasting and can be left on 24 hours a day, seven days a week. This is due to the fact that, unlike traditional lighting, LEDs emit very little heat, making them unlikely to overheat or catch fire. However, LEDs can and will fail in certain situations.

Thanks to LED strip lights, lighting your areas has never been easier or safer. They are also a much more efficient and environmentally friendly way to light your room. We hope this post has assisted you in locating the high density led strip that best meets your needs.