Fluorescent vs LED: Comparison of 2 Most Used Business Lighting 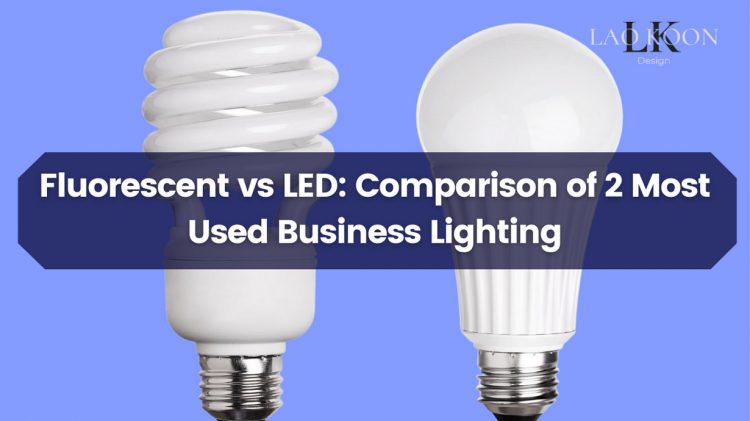 The number of alternatives for commercial lighting systems is nearly endless, whether for offices, storefronts, or factory floors. This diversity is critical because lighting has such a significant impact on workplace safety, worker productivity, and consumer comfort and shopping experience.

Fluorescent vs LED– two of the most used forms of business lighting today: What are they? and Which is the better choice? Let’s find out the answer in this article!

Even though Thomas Edison is credited with developing the incandescent light bulb, he was also the first to commercialize fluorescent lights. General Electric’s Arthur Compton started tests with fluorescent lamps in 1934, which led to GE commercializing the bulbs. Fluorescent lights generated more light than incandescent bulbs in the United States by 1951. CFL bulbs have only had a substantial market in the last two decades since their launch in the 1970s. This might be due to its higher cost, taking longer to reach maximum brightness, and environmental worries over mercury usage.

While British scientist H. J. Round of Marconi Labs discovered electroluminescence in 1907, Rubin Braunstein of the Radio Corporation of America did not publish on infrared emission from gallium arsenide (GaAs) and other semiconductor alloys until 1955. In 1961, James R. Biard and Gary Pittman discovered that it emitted infrared light when electric current was applied to GaAs. Nick Holonyak, Jr., of GE, invented the first real visible-spectrum (red) LED in 1962.

What is a Fluorescent Light or a CFL?

Fluorescent bulbs work by turning UV emissions into light using a fluorescent coating on the interior of the tube. An electrical charge is passed through the inert mercury glass inside the bulb, which generates UV radiation. The electricity excites the gas, which results in the emission of UV light. Fluorescent lights require ignition, which is usually delivered by a voltage pulse or a third electrode (an extra metal element) within the bulb. With tiny tubes, starting is simple, but more giant lights may need a lot of voltage.

Fluorescent light bulbs used to require a “warm-up” period to allow the internal gas to evaporate into plasma, but now there are various near-instantaneous starting methods available. Furthermore, as the light warms up, it takes more power to run. As the fluorescent light becomes older, it requires more and more voltage to generate the same amount of light until the voltage surpasses the ballast’s set resistance and the light goes out. Fluorescent lights grow less and less efficient over time as the light fades, requiring more and more voltage to achieve the same lumen output.

What are the Major Deficiencies in Fluorescent Lights?

Mercury is present in fluorescent lamps. Like the phosphor inside the bulbs, Mercury is a toxic substance that poses a waste disposal problem at the end of their useful lives. A limited quantity of hazardous Mercury is released as a gas by broken bulbs, while the remainder is trapped in the glass itself.

If fluorescent lights are turned on and off repeatedly, they will deteriorate quickly. CFL lamps have a typical light life of 10,000 hours; however, this can be shortened due to frequent switching (turning on and off). Lamps that are left on constantly for long periods have a longer burning life. It’s something to consider if you’re utilizing CFLs in conjunction with motion sensors that activate and time out regularly.

It also implies that to remember or focus the bulb’s luminous output, extra accessory elements are necessary for the light fixture itself (thus increasing unit costs).

What is a Light Emitting Diode (LED)?

A diode is an electrical component or gadget with two electrodes (an anode and a cathode) through which electricity travels in only one direction (in through the anode and out through the cathode). Semi-conductive materials, such as silicon or selenium, are used to make diodes. Semi-conductive materials are solid-state substances that conduct electricity in some situations but not in others.

The gadget generates visible light when current travels through the semiconductor material. It’s almost the polar opposite of a photovoltaic cell (a device that converts visible light into electrical current).

Fluorescent vs LED: What’s the Difference?

Energy consumption or electricity use can be the determining factor for many property managers and corporations when it comes to lights and many other operational technologies linked with a building. While many facility managers are interested in installing energy-efficient HVAC systems, few are aware of the cost reductions that LED tubes may provide compared to their present fluorescent bulbs. This is especially true in situations where lights are on 24 hours a day, seven days a week, such as parking garages, corridors, lobbies, and amenity rooms, among other places.

That is a significant amount to save on energy bills and increase a property’s efficiency. Changing the type tube in the fixture is all it takes. Remember that the more lines that are changed in a home, the more money you will save each year. LED tubes can save both energy and operating costs, compared to the kind of existing fluorescent tubes (T4, T8, T12).

How many times have you strolled through an underground garage or along a corridor to discover a threatening light flickering? The light output of fluorescent bulbs decreases dramatically as they age… They finally begin to flicker. On the other hand, LED tubes do not flash or reduce the quantity of light produced by the bulb. The light intensity is constant; it simply stops operating when the line approaches the end of its useful life. There will be no dimming of light, flickering, or, most importantly, a terrifying experience for your tenants!

Remember that the LED’s lumens remain constant no matter how long it’s been on, but the fluorescent’s lumens deteriorate with time (as previously stated)! While this difference may not appear to be significant, light levels may have a considerable effect when dealing with an enclosed space – such as an underground parking garage.

The advantages of LED tubes as an overall lighting solution are evident from the comparisons above. The term “luminous efficacy” refers to how successfully a light bulb generates visible light about the amount of energy it consumes and the number of lumens it produces. Simply put, it refers to the number of lumens generated per watt.

Why Would LEDs Put Fluorescent Lights Out of Business?

LED efficiency has just surpassed fluorescent lights, and efficiency advancements are occurring at a considerably faster rate. Furthermore, fluorescent lights need the employment of a ballast to maintain the light-producing internal current. The lamp can make an audible buzzing noise if the ballast has a slight flaw or is destroyed. The following are some more flaws:

When it comes to lighting your house, you have more options than ever before. Many of the better solutions are also environmentally friendly. They come in a variety of forms, sizes, and colors to suit any purpose and reduce energy use. Choose between fluorescent vs LED lighting for your home.

Tags: ComparisonFluorescent vs LED
Share296Tweet185Send
No Result
View All Result