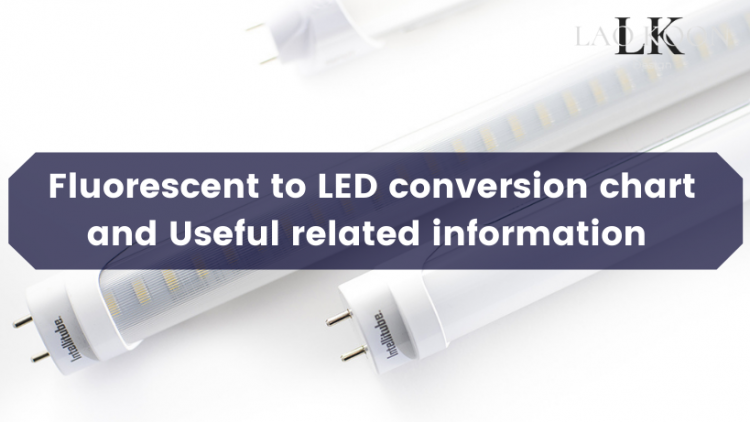 The outstanding features of LED lights have been mentioned quite a few times. But they don’t just stop at saving energy. There are still other issues that business owners or individuals are very concerned about when switching to LED lights.

The cost of switching from traditional to modern lighting devices such as LEDs is still considered quite high for some individuals or small businesses. In this article, Paragon will introduce you to a new concept of LED Converters and their benefits. Fluorescent to LED conversion chart is particularly efficient and suitable for those who have a low cost but still want to use LEDs to save energy.

Is it easy to convert directly from Watts to Lumens?

Before you want to understand and use the conversion chart, you must know 2 units of Fluorescent and LED are Lumens and Watts.

Most likely because Watts is the unit of energy used but Lumens is the unit of light emitted. Sure, higher wattage bulbs produce more Lumens. But two LED bulbs with the same wattage can produce different amounts of Lumens, depending on the efficiency of the bulb.

While you probably know your precious incandescent light bulb uses 60 Watts of energy. How many Lumens bulbs do you have? Typically, a 60-watt incandescent bulb emits an average of 800 Lumens. This is where power equivalence comes into play. Many consumers purchase LEDs based on specified wattage equivalence. But LEDs use much less power than CFLs, halogens, and especially incandescents.

So how can manufacturers assign equivalent capacity? One of the researches to have quality lamp products is based on the Lumen output of LEDs. You can assume its equivalent power has; the same wattage as incandescent lamps with similar output.

The wattage of the bulb is more important. Provided that a circuit can only handle a certain amount of power; Limit the number of electrical devices per circuit. Power is still important but the rise of LEDs with significantly lower power consumption.

It becomes a less important factor. Now it is more important to have the right amount of light (i.e. brightness); makes Lumens count a better measure to buy.

Why do you need to care about the luminous flux index of the LED?

In the past, when using traditional lighting devices such as incandescent lamps and fluorescent lamps, people often paid attention to the wattage (W) and assumed that the larger the lamp, the higher the illumination level. This is not true for some other types of lights such as chandeliers, wall lights, table lamps, ceiling lights or floor lamps, etc. using current led technology. The total amount of light emitted by a bulb is measured in lumens of luminous flux, not watts of power.

“Lumens tell you how much light you need. So when buying LED bulbs, you need to care about lumens, not watts”

With outstanding advantages in lighting, it does not consume too much electricity and heat, and LEDs are extremely durable and have a long life, listing the cost of repairing and replacing bulbs. Types of led lights such as led ceiling lights led spotlights, led string lights, table lamps, led wall lights, etc., are widely used in home interior and exterior design. And above all, today, solar LED lights are the most optimal outdoor lighting equipment.

Fluorescent to LED conversion chart is an LED device to replace traditional lighting devices such as fluorescent lamps. This helps you reduce usage costs, save more energy and use longer.

For example, you can reuse the old LED Bulb tail or Batten lamp tray to use LED light bulbs.

This will significantly reduce the cost of replacing equipment that is still in service and avoid unnecessary waste. Always make sure devices reused for LED conversion are still usable. If they are too old or no longer work stably, you should replace them with new devices to avoid unexpected problems.

How to replace fluorescent lamps with LEDs?

One of the most concerning issues when not knowing whether to replace fluorescent lamps with LEDs is how to replace them and what tools to prepare? Among the types of LED lights, LED tube lights are often the best choice when replacing fluorescent lamps.

Originally, LED tube lights had a fairly simple operation; they did not need the support of starters and ballasts because of their compact design. So how to replace fluorescent lamps with LED tube lights is quite simple, anyone can replace the two lamps themselves if they just need to learn and master each step.

Usually, the most popular fluorescent lamps are the 1m2 and 0.6m types. But like other types of fluorescent lamps, they all have a relatively similar structure and installation, including the following cases:

To check if the fluorescent lamp is using electronic ballast, follow the same steps as above. Ballast is used to stabilize the current. Inside the ballast is the inductance coil to maintain the inductance, which is to contribute to maintaining a stable voltage on the ball in the range of 80- 140V.

The starter is connected to the same two electrodes, when current flows, they carry the charge to the specified level, it will discharge. The starter will usually only work if it has the effect of starting the lamp at first when used under a fluorescent tube and also causes a flickering appearance when the bulb is turned on.

You need to prepare the following tools to replace fluorescent tube lights with LED tube lights:

Remove the old lamp tray, if you use the new one, you do not have to remove it. Next, remove the screw that staples the ballast and the starter using a screwdriver because its support will no longer be needed.

Connect the wires for the lights to work properly

At either end of the tube, you will see a lamp head with no markings. And one lamp head has 2 letters “L” and “N” which are symbols of phase wire and a neutral wire. Use any 220v power cord and plug it directly into the 1m2 LED tube light at the end with the symbols “L” and “N” Only acting as a support for the bulb to be mounted on the light tray. Once completed, you can install the lamp tray, proceed to install the appropriate LED tube light.

How to disassemble the LED tube light?

Installing LED tube lights is relatively simple. With, in any LED tube light, there are always 4 terminals, We can 1 2 3 4 to distinguish then we do:

+ Terminal 1 and terminal 3 are empty

+ Terminals 2 and 4 are connected to 2 full of power supply wires, we do not need to care about the color or polarity of the power cord because it is alternating current.

The way to replace LED tube light bulbs is simple, but you should still be extremely careful. Before replacing or installing, you must disconnect the fuse to ensure your safety.

At this point, you can answer for yourself the question of whether to replace fluorescent lights with LED lights or not. If you have questions about replacing LED tube bulbs with fluorescent bulbs, you can contact our technical staff directly. Or ask and answer right here to receive the most dedicated instructions.

This is the same way to connect every tube LEDs

After understanding the power supply diagram of each lamp, we will find the installation of tube lights surprisingly simple. We will learn each case so that we can apply it correctly according to different needs.

#1. For single light troughs, use 1 tube

You just need to follow the instructions above to be able to use it. Particularly if you are replacing a fluorescent lamp with an electromagnetic ballast, the following should be noted:

The main factors affecting the life of LED lights

The longer the bulb is used, the greater the economic benefit will be. LED lights are known to last longer than traditional lights, but they also don’t last forever. To keep the lamp working properly and prolong its life, you must carefully consider several factors below.

Heat is considered the main enemy of electronic devices and LEDs are no exception. If the temperature where the bulb is placed is high, it will greatly affect the lifespan and luminous duration of the lamp. For closed installation lamps such as recessed downlights, if you do not dissipate heat well, the ambient temperature of the lights will rise higher, and gradually affect the led chip along with the control process. This will reduce the life of the LED. LED devices need to be installed in a cool, dry space to dissipate heat, cool quickly, and increase lamp life.

LED bulbs have a lifespan of up to 50,000 hours corresponding to 10 years of use. So it needs a stable power supply, matched with light-emitting diodes to maximize lifespan. Besides, not only the voltage needs to be regulated, but the current also needs to be strictly controlled.

LED bulbs as well as led chips are very sensitive to high temperatures. If the lamp’s temperature is higher than 85°C, the lamp life will be shortened. And especially when the temperature reaches 105°C, the bulb may stop working. Note that the temperature of the bulb must be lower than 85°C for the lamp to work properly. Therefore, the heat sink of the lamp must have a very suitable structure and work well, especially the large-capacity lamps and lights installed on the ceiling.

Several factors affect the performance of the heatsink:

Each LED device itself is quite resistant to the surrounding environment, but the metal parts, the connecting wires, if left in a humid environment, can be damaged or corroded. Therefore, to best protect the components of the led lights, please install them in a dry location. If installing the light in a place with high humidity, choose LED lights that are rated waterproof and have an IP rating of 65-68.

In the LED driver controller, a plastic (plastic) capacitor is used to store electrical energy for the use of the bulb. If the bulb is used frequently, these capacitors can last up to a year. However, due to factors such as bulb temperature and ambient temperature, they may have a shorter lifespan than theoretically. Besides some companies are using ceramic capacitors for drivers, they withstand higher temperatures and have a longer lifespan than plastic capacitors.

It’s a little hard to understand the Fluorescent to LED conversion chart but it’s worth using. Now you can install tube bulbs into an existing fluorescent trough easier, right? Hopefully, with this method, you will not need the assistance of an electrician and still be able to install LED tube lights. Good luck!