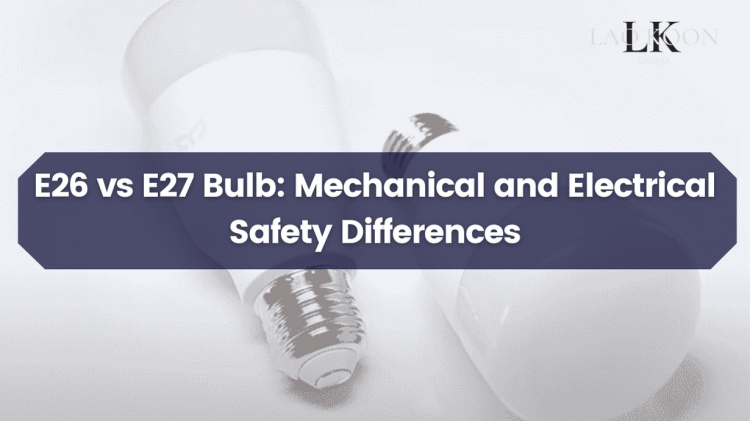 However, in rare circumstances, an E27 bulb can be used in an E26 socket, but the reverse is not valid. An E26 bulb should not be used in an E27 socket. You should be aware that there are certain safety dangers involved, which are listed below.

Any bulb or light with an E26 cap or base is an E26 bulb. The E26 designation refers to the lid or bottom of a light bulb used to attach to a light fixture and make electrical contact. The letter “E” in E26 stands for Edison Screw, the most common lamp base, and the number “26” stands for its millimeter diameter (about 1 inch).

E27 bulbs have a screw diameter that is just 1mm longer than E26 bulbs. Many people mistakenly believe that E26 and E27 are the same things. Although E26 and E27 are technically interchangeable, they may not fulfill the electrical safety requirements for which the lamp and light holders were built.

Because the E26 and E27 standards are designed for entirely different voltage levels, 120V AC and 240V AC, respectively, this is the case. E26 bulb bases, on the other hand, can take up to 120 volts.

As a result, E27 bulbs are safe to use in E26 lamp holders; however, E26 bulbs in E27 lamp holders will cause short circuits and electrical fires. There are some minor changes between E26 and E27 bulbs that are directly connected to their uses.

What are the specifications of these bulbs?

The International Electrotechnical Commission (IEC) has established approved standards for fabricating E26 and E27 bulb bases. Both bulbs have diameter criteria that are almost identical in these standards, with a minimum of 26.05 mm and a maximum of 26.45 mm.

The shortest lengths between the bottom or live contact and the screw heads are the difference between the two. The reason for this is that the line voltages of the two lights are 120 volts and 240 volts, respectively.

These two types of bulb bases are mechanically interchangeable. This implies that an E26 bulb may physically fit into an E27 socket and vice versa.

Even though the screw diameters change by 1 mm, the screw dimension requirements are nearly the same.

The total screw length, the diameter of the screw thread at the trough, and the height of the insulator cap are all significant differences.

A Convergence of Two Voltage Standards

Incandescent bulbs functioned on a particular voltage level only before the invention of new, energy-saving bulbs such as CFL. The LED lights – 120V AC for North America and 240V AC for Europe (and other 240V AC countries).

There was no such thing as a “wide voltage” incandescent bulb that could operate on 120 and 240 volts.

Because the voltage ratings differed, incandescent E26 bulbs could rarely be used in an E27 socket at 240V AC and vice versa due to the inherent voltage incompatibility.

Lamps became compatible with a broad range of voltages with the invention of CFL and LED bulbs. Some LED bulbs, in particular, can run on any voltage between 90 and 240 volts.

E26 and E27 bulbs and sockets are compatible, according to several manufacturers and light bulb vendors. They will argue that an E26 bulb may be securely installed in an E27 socket and vice versa. This is erroneous advice based on incorrect information!

The minimum distances between the bottom contact (live contact) and the screw threads change between E26 and E27. This discrepancy is because the E26 and E27 standards are built for differing line voltage levels – 120V AC and 240V AC, respectively.

You will usually find that E26 and E27 lamp bases are mechanically interchangeable, meaning that an E26 bulb will fit into an E27 socket and vice versa.

However, just because a bulb fits and works doesn’t guarantee your light installation complies with the electrical safety requirements for which the lamp and lamp holders were built. A misaligned building increases the danger of short circuits and electrical fires.

In general, E27 bulbs are safe to use in E26 lamp holders; however, when used in E27 lamp holders with 240V AC, E26 bulbs may represent an electrical safety threat.

This is because E26 bulb bases are only designed to handle up to 120V AC voltages, not 240V AC. Because higher voltages necessitate a greater spacing between live and neutral connections, E27 has tighter separation distance regulations.

IEC regulations control the manufacture of Edison Screw lamp bases, with IEC 7004-21A-2 and IEC 7004-21-9 laying out the necessary specifications for E26 and E27, respectively.

Despite what is generally reported as a 1 mm variation in screw size between E26 and E27, the screw specifications required are almost identical.

The most notable distinctions may be seen in:

The mechanical changes we outlined before may appear insignificant, yet they occur because each lamp base is built for a particular voltage level.

E26 bulbs are intended for use in North America, where 120V AC is the standard, but E27 lights are designed for use in other areas where 240V AC is usual.

Because E27 bulbs are designed for higher voltage circuits, extra care must ensure that their live and neutral connections are sufficiently separated.

***Refer to more: 8 Light Bulb Base Types – Classify Them By Function & Quality

Most merchants will tell you that you can interchange E26 and E27 light bulbs and sockets when you buy them. You’ll be assured that putting an E26 bulb in an E27 socket is safe, and the same goes for the other way around. They claim this is because the difference is only 1 mm, making it near enough to fit. However, this recommendation is based on insufficient data.

While both bulbs and sockets are mechanically interchangeable, meaning that an E26 bulb may be readily inserted into an E27 socket and vice versa, this does not guarantee that the electrical safety requirements for the bulbs and sockets were intended to be satisfied. The reality is that if the installation isn’t up to snuff, there’s a higher chance of electrical fires and short circuits.

In most cases, E26 vs E27 bulb may be securely used in a socket. Using an E26 bulb in an E27 socket, on the other hand, can be hazardous. This is because E26 bulbs can only handle 120 volts, not 240 volts. With higher voltages, the distance between neutral and live contact should be increased. This is why, when it comes to separation distance, E27 bulbs must adhere to specific guidelines.

So, if you have a 240-volt old incandescent bulb, you may use it in an E26 socket with a 120-volt supply. The problem is that your bulb will only work at half its average power. The light will be dimmed. However, when a 120-volt bulb is used in a 240-volt system, the light bulb will quickly burn out.

Converting to LED Lights: 7 Steps and 5 Important Things to Remember