Do Led Light Bulbs Get Hot? Detailed Explanation from Expert 2022 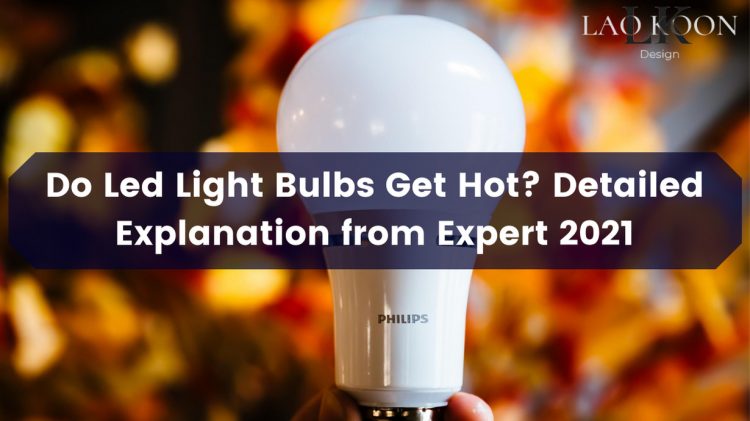 Do Led Light Bulbs Get Hot?

LED is a type of lamp that uses extremely modern lighting technology with the advantage recognized by many users as its low heat capacity, does not increase the ambient temperature, and creates coolness, especially for white light LED bulbs.

This conclusion still makes many users doubt the accuracy of this conclusion. So many people are still wondering  “Do LED light bulbs get hot?”. Continue reading! We will make it clear for you.

In 2014, the LED market reached 2 billion USD and was expected to reach 25 billion USD by 2023. However, according to statistics in 2016, lighting devices applying new led technology only accounted for 10% of the market share.

Unlike most fluorescent bulbs (compact fluorescent or CFL), LEDs light up entirely with no warm-up time. Therefore, their lifespan is longer than that of fluorescent lamps. The initial cost to buy LED lights is often higher than incandescent or fluorescent types, but they are considered more cost-effective in energy savings and longevity.

Currently, most products are designed with standard holders that can directly replace incandescent or fluorescent lamps. On the packaging often stated lumens, watts, color temperature, operating temperature range. They do not emit light in all directions, and their directional characteristics influence the design. However, today, there are many designs with a 360-degree light angle.

Like most lighting fixtures, LEDs are affected by high temperatures, emitting very little heat when in operation. But this part of the temperature can cause damage such as reduced lumens, reduced lifespan. Therefore, in the design, there are often additional heat sinks and coolers. The lifespan of LEDs depends mainly on the quality of the heatsink.

Do LED light bulbs get hot?

LED bulbs have the characteristic of not producing infrared radiation, so they are technically considered to produce quite cool light energy. However, in actual operation, any light bulb will generate heat. They only differ in the degree of heat. But LED bulbs have the advantage of having a heat sink, so the heat generated has been somewhat reduced. The heat of an LED depends on factors such as:

The internal structure of the LED can convert the high voltage source elements down to the appropriate voltage for the LED chip to operate. Thanks to these factors, LED bulbs operate more sensitively than incandescent and fluorescent bulbs. So the hottest part of an LED bulb is only 1/5th the temperature of an incandescent bulb with the same brightness level.

How hot are the Led light bulbs?

Depending on the shape of the Bulb, the room temperature, and the atmosphere, the heatsink of the Bulb has a temperature of 60°C-100°C.

LIFX A21. A21 size bulb can change color, is turning on white light with maximum output (Luminous flux: > 1000 lumens)

The two most minor 9W compact bulbs are the hottest! Although compact bulbs have a lower wattage and lower light output, the heatsink is small, resulting in slower heat dissipation. The power supply electronics are located directly inside the 86°C radiator.

The 13W A19 LED bulb cools a bit. It’s 30% brighter than the two smaller bulbs, but it has a more oversized heatsink, making it easier to dissipate heat into the air.

The LIFX A21 lamp is the coolest while producing the most light. It has a design to use convection airflow through the body, flowing both inside and outside the heatsink. Power supply and electronics components are kept as cool as possible in this new generation bulb.

Why do LEDs generate heat?

All lights generate heat. So why are most LEDs safe to touch while other lighting technologies are too hot to touch?

You will often find that LED lights are more energy-efficient than other types of lights such as halogen, fluorescent or incandescent lights. This involves consuming the amount of energy of a light element to convert into actual light energy.

The production of infrared radiation is the leading cause of other bulbs getting hot. This can be intentionally created in some types of bulbs, such as heaters.

Most LEDs do not produce infrared radiation, so this eliminates a large part of the generated heat. As such, LEDs only generate regular heat energy and light energy. This is also the point that the energy produced by LEDs is very efficient. Therefore, LEDs can convert electricity into light more efficiently than other lighting technologies.

Even though LEDs are energy-efficient, there is still some heat generation. LEDs usually have sound heat dissipation systems, which pull heat away from the rest of the device and then release it to the outside. On standard LED bulbs, they are usually in the form of a heatsink or heat sink bulb.

A dedicated heat sink is usually not required on LED strips such as LED tubes or LED strip lights. Because each light-emitting diode is small and the heat dissipation space is quite ample.

LEDs produce less heat energy, and the heat generated by the heat sink is usually less hot than other lamps. However, the LED heatsink gets quite hot, so be careful not to touch it when the light is turned on.

The quality of the heat sink greatly determines the rate at which the LEDs radiate heat to the surroundings.

***Refer to more: Can Led lights catch on fire? LED Knowledge you should know!

Can I touch the LED Bulb?

Light bulbs are also electrical devices. So the manufacturer still recommends that customers should not touch the Bulb to avoid injuring the skin of their hands.

If you accidentally touch the hot parts of the Bulb without pulling your hand out in time, the possibility of burns is very high. Therefore, even though the heatsink is handled safely and has high heat dissipation, you should not touch it.

LED lights produce heat, but the heat output is minimal. Sometimes it is difficult to feel or experience discomfort from any heat that the led Bulb gives off. LEDs don’t get hot; their heatsink will get very hot.

The heatsink is designed to capture heat from the light and then transfer it to the air. That’s why the heatsink is the hottest part of the Bulb, as it ensures that the whole led system will stay cool.

So when you touch the led bulbs, sometimes they are still cool. Other light bulbs take a lot of energy, and the energy is mainly converted into heat. LED bulbs are different from other lights in that they have 20% better heat control than incandescent and halogen bulbs.

However, be wise when you work with their heatsinks. Because this part still carries a relative amount of heat. Up to now, LED lights are still considered to be the safest and most environmentally friendly light bulbs.