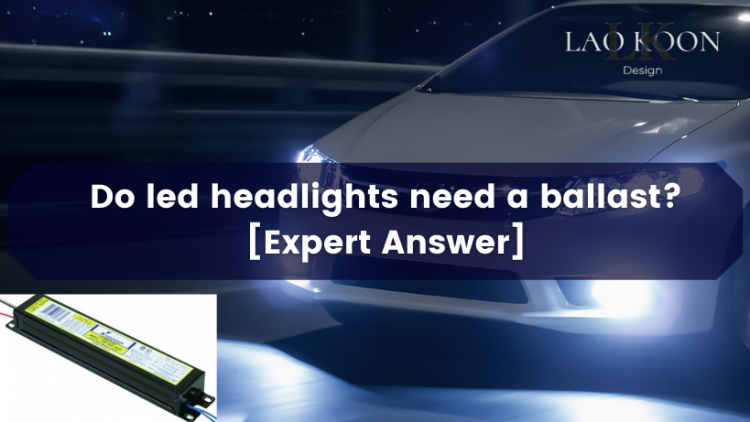 Do LED headlights need a ballast ?

When transitioning from incandescent and fluorescent bulbs to the more market-dominant LED technology, you may be seeking for standard specs to compare the two.

LED bulbs are apples, whereas other lighting technologies are oranges! Certain things are simply unheard of.

A ballast is one of those components that is only applicable to the somewhat obsolete fluorescent and CFL tube lights.

While fluorescent light bulbs require ballasts to generate a high voltage arc in order to switch on, LED bulbs do not require a ballast since they function differently. LED lights may also readily bypass sockets with built-in ballasts.

A ballast controls the current that flows through a light. It provides an initial burst to get things started, then ensures that the electric current is regulated and constant, avoiding getting the lamp’s shoes wet. So, do Led headlights need a ballast? Ballast is not required for Light Emitting Diode (LED) lights; instead, a driver is required.

For existing fluorescent lights, we deal with two types of ballasts: magnetic and electrical. The method they employ to convert the input voltage is what distinguishes them.

– Magnetic ballasts are as heavy as bad news on a wet day. 3.5 pounds on average These bad boys are also responsible for the “humming” sound associated with fluorescent lights — they contain a transformer made up of a magnetic core and wire wrapped around it.

– Electronic ballasts work using solid-state electronics and produce no hum. They are lighter and more efficient and have been promoted by energy efficiency laws since the late 1980s.

A long and slender black box with wiring in and out is hidden inside the fixture and behind the tube lights. The ballast is what you’re looking at.

A fluorescent or CFL tube light source’s ballast is the light source’s regulator. Its major duty is to keep the electricity flowing throughout the tube. When the switch is switched on, it guarantees that adequate power is supplied to ignite the lighting.

Each ballast has a different power rating and should be matched to the voltage of the bulb.

The first extremely high voltage enables the formation of an electrical arc between the two lamp electrodes. The lamp is then turned on by supplying a strong current.

When turned on, the ballast quickly regulates and reduces the voltage. Then it stabilizes the supplied current and maintains a constant supply and light output.

If the ballast was missing, the fluorescent bulb would get a large amount of current, soon overheating and burning out.

However, ballasts are not required for all lights and lamps. Fluorescent, compact fluorescent, and HID lights all require a ballast. Other bulbs, such as halogen or incandescent lights, do not require this functionality.

LED lights, on the other hand, are entirely another story.

LED lights and fixtures need a new sort of power source known as an LED driver. The driver transforms electricity to direct current (DC), which is necessary for the diodes to function.

Some LED drivers are external and connected to the fixture, while others are internal and housed within the lamp or tube. This can cause problems and misunderstanding, especially because certain ballasts can then power internal LED drivers.

Can LED lights be used with existing ballasts? Yes, assuming they have an internal driver that can run on the ballast. Philips, for example, has created a tube that can be used with an existing electrical ballast. It is extremely cost-effective since it reduces the labor cost of changing the fixture. This is known as a Type A light.

This approach is suitable for electronic fluorescent ballasts that have been carefully maintained. This is an excellent chance if the ballasts are less than 10 years old or if there is someone on hand who can alter the ballasts. Savings in energy may be realized rapidly, with decreased labor and material expenses.

If you don’t have any suitable tubes, you’ll need an LED driver. LED lights do not require a ballast, but rather a driver. This is referred to as a Type C application, and it includes a tube and a driver that function together.

Verde often uses this method to replace T12 magnetic ballasts, as well as older T8 systems with deteriorating electronic ballasts. Because the Type C system generally lasts 70,000 hours in a system, replacing the entire system at once is a major advantage. Because of the increased labor expenses, this can be more expensive, although this can sometimes be compensated by incentives from the local utility.

Finally, there are hard-connected fluorescent LEDs that accept 110v power directly to the socket. Inside the tube of these lamps is a driver. These are referred to as Type B applications.

This system method is becoming increasingly popular across the country since it eliminates a potential failure point (ballast or external driver). It is, however, frequently confronted with safety problems and has fewer incentives available in some utility programs.

Do LED headlights need a ballast?

LED lights, in general, do not require ballasts to function. Unlike fluorescent lights, the LED’s current and voltage regulation is not controlled by a ballast.

These are controlled by a driver, which is a component within an LED that performs a similar role as a ballast. This driver is included within the LED bulb and does not need to be purchased separately from the LED fixture.

This is comparable to how certain HID bulbs incorporate ballasts inside the fixture itself.

Furthermore, the operation of an LED differs greatly from that of fluorescent light. The former employs direct current, whereas the latter employs alternating current.

There is no need for an electrical arc to activate the electrodes as fluorescent lights do.

In actuality, an LED performs an LED function electronically like a computer, with a binary on/off state. The technology is more sophisticated, with electrical chips inserted at the bulb’s base.

Is it necessary to remove or bypass the ballast in order to use LED lighting?

One of the nice things about LEDs is that they can be engineered to operate with ballasts even if they don’t need them in the first place.

The ballast may be a part of your current fixture and socket and removing it to make it LED compatible may be costly or time-consuming.

LEDs, fortunately, are friendly and compatible with a wide range of older fixtures and connections.

LEDs, commonly known as Type A tube lights, can be purchased with an existing specialized driver that lets the LED work with your prior socket’s existing external ballast.

To replace your CFLs and fluorescent lights with energy-saving, mercury-free LED bulbs, you no longer need to remove, rewire, or perform difficult electrical work.

Essentially, type A tube LED bulbs allow you to bypass the ballast feature while without causing any harm to the LED.

In reality, installation is as simple as changing a light bulb and takes only a few minutes.

You have not only saved money by avoiding employing an electrician, but you have also begun the path to significantly lower power costs and yearly savings.

Indoor plant growth is aided by the use of a grow lamp.

In comparison to the more widely used fluorescent tube lights and high-intensity bulbs, their LED counterparts have proven to be highly successful.

This is mostly due to the fact that LED grows lights are very adjustable. They may be changed in color temperature, color spectrum, and brightness to meet the demands of various plants on the fly.

Traditional grow lights require ballasts to ignite the high-voltage electrical arc required to switch on the extremely bright lights, but LED grow lights do not.

Everything is included in the LED grow light fixtures. External ballasts or other components are not required. They just connect into an electrical outlet and are ready to use.

In any event, LEDs startup with a direct current and do not require significant alternating current. This is in addition to the fact that no electrodes require the formation of an electrical arc between them.

The simple line is that an LED bulb works significantly differently from a fluorescent light.

***Refer to more: Growing Plants With A Desk Lamp – A Scientific And Effective Method

So, there you have it, a synopsis of how ballasts operate and do LED headlights need a ballast.

Also, conduct more studies on LED grow lights because they provide a plethora of benefits that other lights do not.

Do your old fixtures have ballasts that must be bypassed?

Would you consider utilizing LED grow lights to create an indoor herb garden?

Please leave your views and comments in the section below. Thank you for reading!

Share296Tweet185Send
No Result
View All Result