Converting to LED Lights: 7 Steps and 5 Important Things to Remember 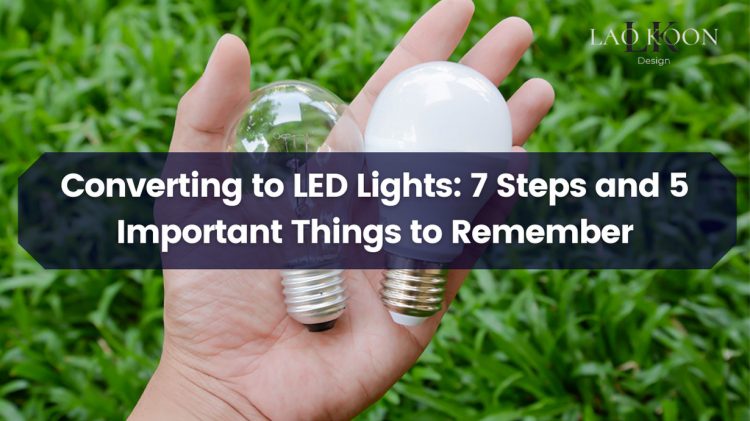 LED lighting is the most recent technological innovation in the lighting industry. Because LEDs differ from typical fluorescent and incandescent bulbs, they provide a number of noteworthy advantages. LEDs are not only more durable than traditional forms of illumination, but they also have a longer lifespan and utilize a fraction of the energy that other light bulbs on the market do.

We all know that LEDs are far more environmentally friendly than their traditional predecessors. When your home’s light sources become too dim to provide the level of illumination you need, it’s necessary to replace them, and long-life LEDs are a good option if you want to save money on both replacement and energy use.

I took advantage of the opportunity to change all of the lights in the house to LED when a couple of them stopped working. Of course, whether you replace individual bulbs or your whole home’s lighting system is dependent on your needs and selections.

Finally, the optimal time to convert your home to LED lighting is when:

2 Options for Converting to LED Lights

For LED conversion, there are two choices. On the one hand, a new light with integrated LEDs can be used to replace the entire bulb. Alternatively, the present lamp’s illuminants can be replaced. One of the other options may be more appropriate depending on the situation.

Lamps with integrated LEDs are a good alternative if you want to replace the entire lighting system in your house. These are normally fixed in situ and are not replaceable. This is regarded as a disadvantage by some, however it is unimportant due to the extended lifespan of LEDs. The benefits include entirely new design options.

Changing up a complete lighting fixture, on the other hand, can be pricey. Though a new troffer isn’t particularly expensive, having it installed can be costly; this is especially true if you’re upgrading the lighting across an entire building.

This is the easiest and most practical solution; all you have to do is replace the old lamp with a new LED-powered lamp. Many of the lights in the house have E26, E11, or GU10 bases. For these types of bases, there is a large range of LED lighting options. Not only is this alternate solution straightforward, but it also saves you money when compared to purchasing a brand new LED integrated light.

When it came to converting to LED lights, I chose the second option, which was to replace the lights with LED technology while keeping the original bases. This is both easier and more cost-effective for me to replace than purchasing a new LED lighting system. If you’re on a tight budget, this is a good alternative.

5 Things to Remember When Converting to Led Lights

#1. What level of brightness is required?

The brightness of LED bulbs is now measured in lumens rather than watts. If you wish to preserve the lamp’s brightness after conversion, you must first determine the brightness of the old bulb. You can use the Lumen Watt calculator to assist you.

I have some suggestions for you:

Many antique light sources emitted a lot of light and radiated it all over the place. LEDs emit light in a very directed pattern. Several LEDs are frequently put in one illuminant for larger beam angles. The light source’s needed beam angle is determined by the bulb to be converted.

#3. What kind of LED’s color temperatures?

LEDs are available in a variety of color temperatures. The Correlated Color Temperature (CCT) of each lightbulb corresponds to the Kelvin (K) temperature scale. The lower the Kelvin number, the warmer and yellower the light. The Kelvin scale indicates how chilly and blue the light is.

Personal preference has a role in deciding which light hue to use where. “Natural white” or “cool white” light colors are excellent alternatives for basic ambient lighting. They are also suitable for use in the kitchen. For your nightstand reading lamp, bluer, more natural light or “daylight” bulbs are preferred.

#4. Is it necessary for the lamp to be dimmable?

While most LEDs include brightness controls, dimming performance is largely governed by driver compatibility and LED driver quality. You should know that not all LEDs will work with your current control, so please test again to avoid possible errors. While blurring is technically possible, double-check that everything is suitable and will meet your needs.

#5. Is there anything else that matters?

When replacing LED light sources, problems similar to those seen when connecting to an old dimmer can arise. Only trial and error will reveal whether the new LED bulbs are trouble-free. Otherwise, a new LED transformer must be installed in place of the old transformer.

Some luminaires have tiny lamp glasses that encapsulate the illuminant firmly. Even though LED lamps have great efficiency, some of the energy must be discharged into the environment in the form of heat.

When using exceptionally bright and powerful lights in small lamp glasses, heat can build up. The LED lifespan may suffer as a result of this.

This guide will show you how to convert fluorescent tube lights in your home to LED illumination.

#1. Take Precautions for Your Safety

Safety is always a key issue when dealing with electrical equipment, especially converting to LED lights.  Working with wiring when retrofitting LEDs to fluorescent lighting can be perilous for beginners.

When switching to LED lights, you should use safety eyewear and work gloves. When replacing fluorescent lights with LED fixtures, go gently and take all essential procedures to ensure a safe and successful installation.

As I said above. When you convert to LED lights, there are a few things to consider before committing to an LED retrofitting project for your home.

#3. Turn off the power supply

When converting to LED  lights, the first step is to turn off the power to the room where the fluorescent fixtures are being replaced.Notice:

Disconnect the wiring from the ballast of the fluorescent light fixture. Remove the ballast and, if applicable, the starter from this fixture.

Before beginning the process of changing fluorescent to LED, make sure you have the right quantity of non-shunted lamp holders.

Make a permanent notation on the live end of the lighting fixture so it’s easy to find. Leave the lamp holders on the fixture’s other end unconnected.

The lamp holder should be attached to the ceiling box. Tighten the screws that hold the board in place.

Consider putting a warning sticker on the interior of the fixture about lighting replacement. This will serve as a reminder to you or anyone else working on the fixtures in the future that they have been rewired to accept LED bulbs.

***Refer to more: Can You Put Led Bulbs In Any Regular Fixtures? [Consultants]

Complete the LED retrofitting by turning the power back on now that the wiring is complete and the LED lighting are installed. The new LED lights should turn on immediately.

Benefits of Converting to LED Lights

LED lights are, without a doubt, more expensive than fluorescent lights. However, because of economies of scale, costs have been reduced as the product has become more widely used. By switching to LEDs, you can also save money on ballast replacement. LED linear tubes have a lifespan of 50,000 hours or more, which is approximately double that of equivalent fluorescent tubes. That means you’ll be buying fewer replacement tubes over time. If you’re paying someone to produce the replacements, you’ll save money on labor in the long run. Aside from that, there are a number of other advantages to adopting LED lights.

Unlike incandescent bulbs, which convert only 10% of the energy spent into light while the remaining 90% of energy is wasted as heat, LED lighting transforms 95% of the energy consumed into light.

Because of LED lighting’s energy efficiency, considerable savings can be realized over time. LED lights can save you 20% to 50% or more in energy costs when compared to fluorescent lights. Although LED lights are more expensive at first, they save you a lot of money in the long run in terms of electricity and maintenance costs. What are you waiting for to switch to LEDs for this benefit alone?

LED lights are not only good for your pocketbook and your bottom line, but they are also good for the environment. They reduce carbon emissions and landfill clutter by using less energy and requiring fewer replacements.

In addition, unlike fluorescent lights, LED lights do not contain mercury. Because this component is so hazardous, state and local laws require fluorescents to be recycled rather than discarded. Fluorescents are very brittle and can break, putting the environment and people near them in peril. LED lights, on the other hand, are far more durable and shatterproof than fluorescent lights. As a result, they are a safer option for any application, especially if youngsters will be using the space to be illuminated.

Incandescent lights throw light in all directions, making it impossible to direct it. LED lighting is directional, allowing you to focus the light where it is most needed.

LED lights have the advantage of not emitting the unpleasant flickering light that fluorescent bulbs do since they provide steady brightness. LEDs are also brighter, making them excellent for workspaces and task completion.

LED tubes, unlike fluorescent bulbs, do not require a long warm-up period; instead, they instantaneously reach full brightness.

Furthermore, LEDs come in a variety of color temperatures, ranging from warm to cold, allowing you to select the LED that’s best for the space you’ll be illuminating and the amount of use it’ll get.

When all of the advantages and disadvantages of LEDs are considered, it is clear that they are a net gain, whether for home, commercial, or industrial use.

You may have wondered about converting to LED lights. Hope this article has cleared all your doubts and provided important points when making the switch to LED. Wish you success changing your home with LEDs.