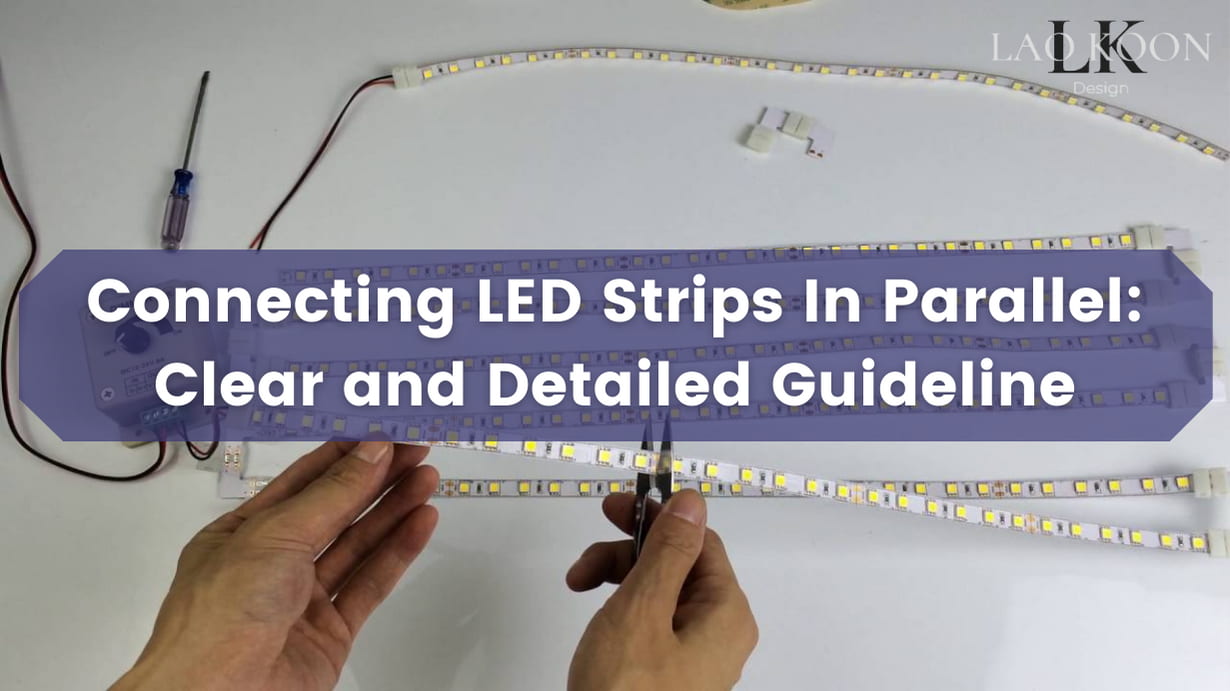 Those looking for practical information on electrical circuits and wiring LED components should have come across this guide first. However, it’s likely that you’ve already read the Wikipedia page on series and parallel circuits here, as well as a few other Google search results on the subject, and are still confused or want more specific information as it relates to LEDs.

We have gathered and prepared all of the critical information needed to help you understand the concept of electrical circuits and their relationship to LEDs based on years of providing Customers receive LED education, training, and explanations of the electronic circuit concept.

First and foremost, don’t let electrical circuits and wiring LED components appear intimidating or confusing – correctly connecting LED strips in parallel can be simple and easy to understand if you follow this post. Let’s start with the most fundamental question.

Buying quality, certified products is a no-brainer when it comes to safety. Because they are made of thin material that cannot withstand high currents and heats up quickly, cheap LED strips connected in series are known to be a fire hazard.

Because LED strips are typically mounted on wood or plastic surfaces, the heat can pose a serious fire hazard.

Even if you’re using a genuine product, there are a few precautions you should take.

You must consider the differences between the various types of LED strips that you may have lying around that you want to connect.

An RGB LED strip, for example, consumes three times the energy of a white LED strip.

Because they do not share the same power source, not all strip lights can be connected together. The voltage of the PSU and the LED strip must be the same. There are three possible ratings.

Aside from safety, you must consider the most cost-effective way to power your connected strips.

Connecting LED strips into one line and looping it back to the starting point to cover a rectangular ceiling is not the most energy-efficient technique.

This way, you can avoid using two power supplies and avoid voltage drop, which causes strip lights near the end of the chain to dim.

Don’t worry, we’ll see how to wire a parallel LED circuit here, which should help tie the ideas together.

Using the same example with a 1000mA output driver, each LED would receive 333mA; the total output of the driver (1000mA) divided by the number of parallel strings (3).

Here are a few bullet points about parallel circuits for your convenience:

The amount of current that must pass through any given LED strip segment is reduced because they are directly connected to the power supply. This can significantly reduce the likelihood of a voltage drop.

The main disadvantage of this strategy is that it will necessitate some additional wiring. The main issue is that most power supply devices only have one positive and one negative output wire, so connecting to more than one LED strip section requires splitting that output into multiple wires.

For this purpose, specialized wire splitter terminal blocks are available.

Another issue is that certain LED strip segments may be placed far from the power supply. Long wire lengths may not only be an additional expense in these cases, but they must also be of the appropriate gauge. Otherwise, voltage loss in the cables may occur before reaching the LED strip portion.

Is it possible to connect different brands of LED light strips together?

You can connect different brands of LED light strips together as long as they have the same voltage.

Assume you’re attempting to connect two voltage-varying strips. They simply won’t work in that case due to the different voltage requirements for each strip, and you risk damaging them – a waste of money.

You must also ensure that the polarity is properly aligned when connecting them. The polarity of different brands of light strips may be wired slightly differently – make sure the positive connectors are aligned.

To guide you, there should be a plus and minus symbol next to the copper pads.

It’s also worth noting that different LED strip light brands can be manufactured in a variety of quality levels. If you connect different brands of LED strips, you may notice that one of them wears out faster or begins to dim.

Connecting LED strip lights from the same manufacturer is always the easiest and best option, even if it means passing up a good deal on a lower-priced brand.

***Read more: Can you cut LED strip lights? How to ​​connect a flexible led strip?

Things to consider when connecting LED strips in parallel

One thing to remember when running parallel and series/parallel circuits is that if a string of LEDs burns out, the LED/string will be removed from the circuit, and the extra current load that was going to that LED will be distributed to the rest. This isn’t a big deal in larger arrays because the current is more evenly distributed, but what about a circuit with only two LEDs per string?

The remaining LED/current string would then be doubled, resulting in a higher load than the LED can handle, resulting in burnout and the destruction of your LED. Keep this in mind at all times and try to have a setup that won’t destroy all of your LEDs if one of them burns out.

Another potential issue is that even when LEDs from the same production batch and same binning are used, the forward voltage can vary by 20%. Varying voltages across separate strings cause the current to be unequally divided.

When one string draws more current than another, the overdriven LEDs heat up and their forward voltages fluctuate, resulting in more unequal current sharing; this is known as thermal runaway. Many circuits set up in this manner have worked well in the past, but caution is advised.

When beginning your lighting project, there are a few things to keep in mind. Let me sum them up.

Your power supply should not be rated less than or equal to the total wattage of the strips. Otherwise, you risk experiencing a voltage drop that causes the LEDs at the end to dim.

When it comes to the actual connections, you must always cut an LED strip from the copper connections located every few inches along the strip. If not, some of the LED lights in the cut area may not function properly.

To protect the connectors, use a heat shrink over them, which differs for indoor and outdoor use. Alternatively, the electrical or insulating tape can be used.

Is a resistor required for each LED in parallel?

Because LEDs are diodes that are biased forward. When you cross their junction voltage, they become very low resistance and allow an excessive amount of current to flow. You don’t need a resistor in and of itself; you need current control.

What are the similarities and differences between parallel and series circuits?

A series circuit has all of its components connected end to end, forming a single path for electrons to flow. In a parallel circuit, all components are connected across each other, resulting in exactly two sets of electrically common points.

What is the benefit of a parallel connection?

There is no voltage division when LED strips are connected in parallel. The potential difference between each LED strip equals the supplied voltage. By connecting LED strips in parallel, the total effective resistance of the circuit can be reduced.

Which of the following is a drawback of a parallel circuit?

Is a parallel circuit superior to a series circuit?

In a nutshell, we hope that this article has provided useful information as well as answers to frequently asked questions so that you can learn more about connecting LED strips in parallel. Before you buy anything, it’s always a good idea to sketch out and plan your lighting project. If you need assistance, please leave a comment and we will be of service to you. Thank you for reading!