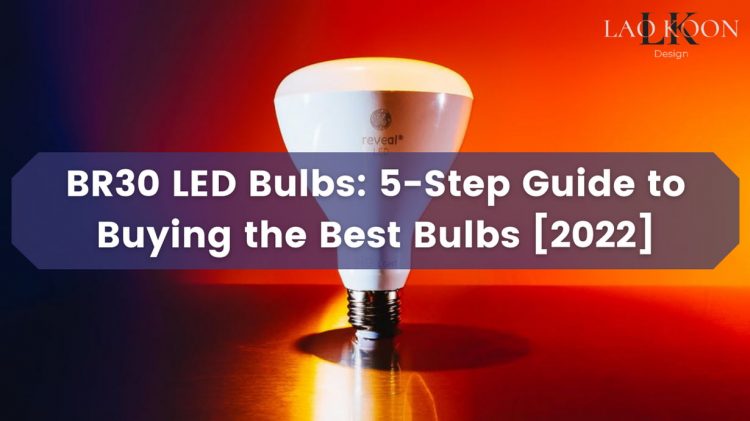 You may be looking to replace some of the older lightings in your home and come across the BR30 form factor. What do BR30 led bulbs mean? And how do you go about looking for an LED retrofit replacement?

BR30 led bulbs are a type of bulb that measures about 5 inches long and slightly less than 4 inches in diameter. They fall into the category of directional lighting, with a typical “wide flood” beam angle.

First, let’s break down the acronym. BR is an abbreviation for “Bulged Reflector,” which refers to the bulge outward as one moves away from the socket, or the flared shape of the bulb body. In contrast, a PAR or MR-shaped bulb.

The bulge in incandescent versions of the BR30 bulb allows for a 120-degree or wider flood beam. The light emitted from the filament can be emitted across a wide-angle by allowing the reflector to flare out.

The number “30” is next on our list. The number, as with most other lighting products, refers to the bulb diameter in eighths of an inch. As a result, the “30” denotes a bulb diameter of 30/8 inch, or 3.75 inches.

Step 2: Determine the number of lumens or wattage equivalent required

First and foremost, you’ll want to make sure that when you replace your incandescent BR30 bulb with a BR30 LED, you get the same amount of light as before.

You may be used to thinking of bulb brightness in terms of watts; a 40-watt bulb is brighter than a 60-watt bulb.

However, keep in mind that watts are a measure of electrical energy in, not necessarily total light output.

Because most incandescent bulbs have the same efficiency, this was an acceptable method of estimating brightness.

LED BR30 bulbs are far more energy-efficient than incandescent BR30 bulbs. This means that watts are no longer a useful unit of measurement for brightness.

Instead of focusing on watts, you should concentrate on light output, which is measured in lumens.

Not sure how many lumens you’ll require? Based on what you had installed prior to switching to LEDs, you can estimate how much you’ll need.

Using an approximate conversion factor of 10 lumens per watt, this can be calculated:

Lumens are calculated by multiplying [watts in incandescent] by ten.

Along with the product specifications, the number of lumens is listed.

Keep in mind that these conversion factors are lower than those used for A-style bulbs, indicating that incandescent reflector bulbs are slightly less efficient.

Step 3: Confirm that the beam angle is close to 120 degrees (wide flood)

When reviewing the specifications of a BR30 LED bulb, make sure the beam angle is around 120 degrees, which is also known as a “wide flood” beam angle.

What is the significance of this?

The quantity of light particles that fall on a surface determines the apparent brightness of an object (illuminance, measured in lux). Lumens, on the other hand, measure how much light is emitted from a light source but do not tell us where that light is going.

The bulb’s beam angle is important because it tells us how to spread out the emitted light and, as a result, influences how much illuminance it provides over how wide an area.

This is covered in greater detail in our article about lumens and lux.

If you change the beam angle abruptly to something narrower (e.g., 60 degrees), you may inadvertently create lighting “hotspots” in which certain areas are very bright while others are dim.

Step 4: CCT and CRI are used to determine the color of light

With incandescent BR30 bulbs, color was never an option because nearly all products from all manufacturers had the same color temperature, 2700K, and color quality, 100 CRI.

However, with BR30 LED bulbs, there are numerous color temperature and CRI options, making it more difficult to choose the right one for your needs.

A color temperature is a number that describes how “yellow” or “blue” the color of light is.

2700K is the same color as a traditional incandescent light bulb. 3000K is slightly bluer and more similar to the color of a halogen light bulb, but it still has a warm, inviting yellow hue to it.

4000K is often referred to as “neutral white” because it is neither blue nor yellow – and is located in the middle of the color temperature scale.

Anything above 5000K will appear blue-ish and is not recommended for standard residential applications, but is often preferred for art and studio applications.

Lighting is ultimately a matter of taste, but we recommend beginning with 2700K BR30 LED bulbs to test. If you believe it casts too much of a “yellow” hue, you can try 3000K. Remember that the 3000K bulb will be slightly “cooler” or “crisper” than an incandescent BR30 bulb.

CRI is difficult to understand because it is not immediately visible when looking directly at a BR30 LED bulb.

CRI is a score ranging from 0 to 100 that measures how accurate objects appear when illuminated. The higher the score, the more accurate the result.

What, after all, does “accurate” really mean?

Assume you’re attempting to illuminate a painting. The painting would look exactly the same under a perfectly accurate BR30 LED bulb as it does under a halogen bulb.

An inaccurate (low CRI) BR30 LED bulb, on the other hand, would make the painting appear “off” – the colors could appear mismatched, washed out, or indistinguishable.

This isn’t just for paintings or artwork. If the CRI of the LED bulb is insufficient, the appearance of furniture or food may appear lackluster and dull.

So, what is a sufficient CRI value?

We recommend purchasing BR30 LED bulbs with a CRI of at least 90.

We recommend a CRI of 95 or higher for improved appearance.

How do you determine the CCT or CRI of a BR30 LED bulb? Almost all manufacturers will be able to provide you with this information on the product specification sheet or packaging.

Step 5: Do you require BR30 LED bulbs that can be dimmed?

A traditional incandescent BR30 is a simple device that heats a filament to a high enough temperature (2700 degrees Kelvin) to produce light. Dimming such a bulb is simple: simply limiting the amount of electricity flowing to the bulb allows the bulb’s filament to cool, resulting in less light output.

This principle is used by the vast majority of dimmer circuits that are most likely installed in your home (known as TRIAC).

As true electronic devices, BR30 LED bulbs are not as simple. They are not automatically compatible with dimmer systems unless specialized electronic circuits are integrated into the bulb.

Attempting to dim an LED that has not been labeled as dimmable can result in erratic flickering or buzzing noises, as well as, in rare cases, safety hazards.

If you have a dimmer installed or require dimmability, make sure the BR30 bulb is labeled as dimmable.

The bulbs can be used in almost any household fixture, including ceiling fixtures and lamps. Meanwhile, BR30 bulbs provide directional lighting that shines straight ahead, making them ideal for recessed fixtures and can lights.

In what situations can I use BR30 bulbs?

BR30 light bulbs provide soft-edged, directional illumination and are commonly found in general household light fixtures, recessed can lighting, and/or track lighting. Their lighting is less precise and casts less shadow than PAR bulbs, but they are ideal for dimmer-equipped fixtures.

Is BR30 considered a standard?

A19 and BR30 are simply two different standardized light bulb shapes. The digits after the A refer to the bulb’s diameter, which is measured in eighths of an inch. The BR30, on the other hand, has a flat end that is better suited to providing directional lighting.

In conclusion, we hope that this post has provided you with useful information as well as answers to your questions about BR30 led bulbs. If you need assistance, please leave a comment and we will help you.