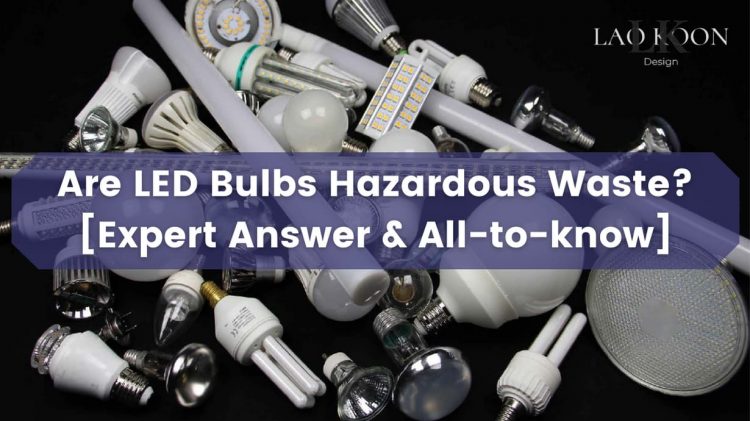 Many people discover that the first-generation LED lights they installed are simply insufficient for their needs and prefer a high CRI or flicker-free lighting option instead. However, they are unsure how to handle the old LED bulbs. As a result, frequently asked questions are: Are led bulbs hazardous waste? Where do you dispose of the old LED after replacing it? What are the rules and regulations regarding their disposal?

In this post, we’ll look for answers to those questions.

LEDs are an energy-efficient and mercury-free source of lighting, but they, like other electronic goods, may have some negative environmental effects, according to research. A study conducted in the United States tested a variety of LEDs and discovered that they could be classified as hazardous waste due to levels of lead, copper, nickel, and silver. Their use of rare earth metals may also put additional strain on natural resources.

LEDs have grown in popularity over the last ten years, and they are now used in a variety of lighting applications, including traffic signals, decorative lighting, and office lighting for small areas (‘task lighting’). LEDs contain a high concentration of earth metals, such as copper, lead, nickel, gold, silver, and arsenic, which are toxic and/or scarce.

As the use of LEDs grows, so will their contribution to waste, raising concerns about how to manage them at the end of life, with fears that they will eventually have the same environmental impact as other electronic waste, such as mobile phones and computers.

The findings confirmed the presence of high levels of iron, copper, and nickel in the LEDs. Gold and silver prices were lower. The LEDs tested would be classified as hazardous waste under California regulations. Except for the dimmer yellow LED or low-intensity yellow LED, all of the LEDs tested exceeded California’s limits for at least one metal – lead, copper, nickel, or silver. Copper levels in LEDs, for example, were found to be up to 3892 mg per kg, whereas the California limit is 2500mg per kg. Lead levels reached 8103 mg/kg, exceeding the 1000 mg/kg limit.

However, under federal regulations, the only limit that was exceeded was the 186 mg per liter limit for lead concentration in landfills from low-intensity red LEDs (the threshold is 5 mg per liter). The only LEDs that would not be compliant with the EU’s RoHS Directive, which sets a lead limit of 0.1 percent per 1000 ppm of homogeneous material, were the low-intensity red LEDs.

Despite being present in small amounts, the use of gold and silver had the greatest impact on resource depletion. Copper, iron, lead, nickel, and silver were the most toxic components of the LEDs tested. Non-RoHS compliant, low-intensity red LEDs have the highest toxicity potential due to their high lead content.

Brighter LEDs have higher toxicity potentials than their low-intensity counterparts due to higher concentrations of copper, iron, and nickel. Nickel and copper are of particular concern because they have the potential to harm ecosystems if leached from landfills, implying that all LEDs, because they all contain these metals, have the potential to harm ecosystems.

Overall, white LED lighting appeared to be the least harmful because it contained less copper and no arsenic or lead.

The conflicting assessment of “hazardous” by national and state regulations highlights the importance of developing cross-national and international regulatory policies. The EU’s ban on certain hazardous substances in waste electrical and electronic equipment goes some way toward achieving this in Europe, but greater coordination across countries and continents may be required.

Furthermore, while the effects on resource depletion appear to be minor at the moment, this could change, particularly with the development of high-power LEDs. Improved recycling technologies, as well as a redesign of LEDs to use fewer rare metals, may help to mitigate these effects. The findings of this study could be used to guide manufacturing and product design by emphasizing the need for less hazardous alternatives to some of the substances used in LEDs.

LED bulbs: no mercury, but still a universal waste

The United States Environmental Protection Agency (EPA) has several regulations governing the disposal and management of potentially hazardous materials. Universal Waste is a type of material that is widely produced and used but has the potential to harm the environment. Household items such as bulbs batteries are classified as Universal Waste, and as a result, if you visit your local landfill or waste company, you will most likely notice a separate section designated for such materials.

Because of the high levels of mercury in fluorescent bulbs, you are probably familiar with the regulations governing their disposal. However, one of the advantages of LED lighting is that it contains no hazardous chemicals such as mercury.

What you should do if the LED lamp is broken

Using stiff paper or cardboard, carefully scoop up all fragments and powder and place them in a rigid container that complies with the universal waste rule, close the container, and seal the seams with duct tape. If disposable rubber gloves are available, use them to clean the bulb (i.e., do not use bare hands). Place damp paper towels in a plastic bag after cleaning the area. To clean up broken bulbs on hard surfaces, do not use a vacuum or broom.

What is the best way to dispose of LED lights?

The disposal of LED bulbs will be governed by different rules and regulations in each jurisdiction and locale. Your local landfill or waste management company will most likely have reasonable fees or quotas on LED bulb disposal for regular household volumes. For example, they may accept up to 30 bulbs for free before charging a fee per pound or per bulb.

Is it okay to recycle light bulbs?

Incandescent bulbs from the past are not recyclable. Please dispose of them in your garbage can. Don’t be tempted to recycle your old light bulbs in the same container as your glass bottles and jars. They are made of different types of glass and contain metal components.

How do you get rid of led light bulbs?

LEDs can be discarded with the rest of your garbage, or you can find a recycling center that will accept them. They do not contain mercury, but they do contain metals like copper, nickel, and lead. Most communities do not require the recycling of LEDs.

Are LED bulbs classified as e-waste or universal waste?

LED bulbs are typically equipped with electronic circuitry (circuit boards) similar to that found in computers and other electronic devices. These parts are frequently salvaged by e-waste recyclers (sometimes called universal waste).

We hope that this article has provided you with an answer to the question: Are led bulbs hazardous waste? And, as a result, you will understand how harmful they are to the environment, as well as how to handle the situation when you want to dispose of unused led bulbs. If you have any further questions, please leave a comment below this post and we will assist you in answering them. Thank you for your time.