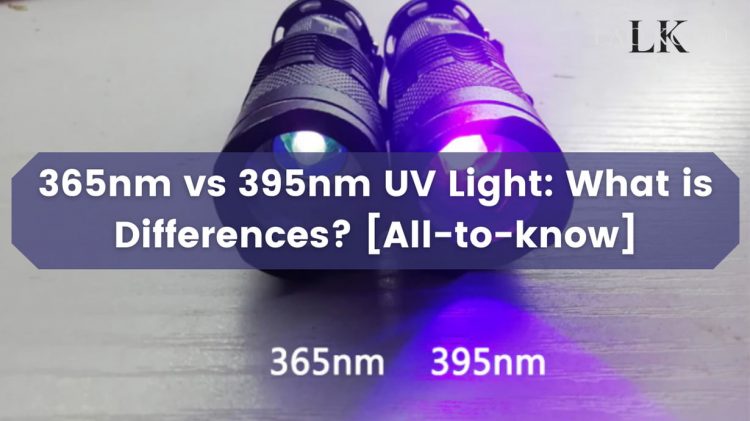 If you’re looking for a UV flashlight, you might come across two wavelengths: 365nm and 395nm. What does this mean? And 365nm vs 395nm, which wavelength is better? Continue reading to learn more!

What is the definition of a UV flashlight?

A UV flashlight emits ultraviolet radiation, which is a type of light energy that the human eye cannot see. When ultraviolet light strikes certain objects, they fluoresce, which is similar to a bright glow. Many objects and substances, including paints, dyes, minerals, animals, and bodily fluids, fluoresce, which means that their presence can only be detected when a UV light source shines on them.

Before we get into whether 365 nm or 395 nm is better for your application, it is important to understand the fundamental principles of wavelength and light.

Ultraviolet lights, like any flashlight, produce specific wavelengths of light. The difference between UV light and non-UV light is that UV light is mostly invisible to the human eye – we can only see a portion of the light, which appears as a hazy purple color to our eyes.

UV light waves excite the material that they strike, causing it to fluoresce and emit visible light. This gives UV-examined materials an obvious glow.

The UV-A wavelength range includes both 365 nm and 395 nm options. UV-A lights are generally useful for creating and observing fluorescence effects, as well as curing plastics and paint. UV-A wavelengths are less harmful than UV-B and UV-C rays.

So, what does a difference of 30 nm imply?

The 395 nm LED emits the most energy at 395 nm, as defined by the term peak wavelength, but it also emits a significant amount of energy at 400 nm and 410 nm. These wavelengths are firmly located in the visible, violet region of the spectrum.

Of course, the 395 nm LED emits light at wavelengths other than 395 nm, and the light energy at these wavelengths is very effective at producing fluorescence effects or initiating UV-A reactions. However, it is important to note that a significant portion of the light energy is emitted in the visible, violet region.

Looking at the 365 nm spectral output, you’ll notice that almost all of the light energy is within the invisible UV-A range only, with emission energy peaking before 400 nm. This maximizes UV-A energy in comparison to visible light energy and is preferred for most UV-A applications.

However, when illuminating a 365 nm LED, you will most likely notice a dull, bluish-white color emitted. This is due to “leakage” of visible light, which occurs when minuscule but visible amounts of visible wavelength energy, i.e., white light, are also emitted.

The proportion of visible light energy is so small that it is shown as “0” in spectral charts, but in some applications, such as UV photography, the visible light is detectable and may be bothersome. Additional visible light filtering techniques may be required in such cases.

365 nm for the most intense fluorescence

Most UV flashlights use LED light bulbs with wavelengths of 365 or 395 nanometers (nm). Different wavelengths influence how UV light is absorbed by materials and how they fluoresce in the presence of UV light.

In general, 365 nm UV light is considered more powerful than 395 nm light – a 365 nm UV light will illuminate tiny stains, cracks, and flecks of dried liquids better than a 395 nm UV light. Furthermore, because 365 nm UV lights do not emit violet light, many objects fluoresce the most at this wavelength, as evidenced by absorption spectrum measurements.

As a result, 365 nm light may be better suited for applications requiring stronger fluorescence effects. When combined with the benefit of emitting less visible, violet light, 365 nm light can be considered an optimal choice when performance is critical.

365nm vs 395nm: The cost and efficiency differences

365 nm LEDs, on the other hand, are generally more expensive. Because of the way LED diodes are manufactured, 365 nm wavelength chips are less efficient and more expensive. The exact price difference will depend on the product type, but in general, 365 nm LEDs are more expensive.

Because of the shorter wavelength, a 395 nm light will produce more visible light, so if you prefer a brighter, wider beam of light and aren’t looking for the smallest stains and spots, the 395 nm blacklight will suffice.

A 365 nm light, on the other hand, is the best UV flashlight for precise uses such as currency analysis because it produces less visible light, allowing a clearer view of the fluorescing material.

To be honest, if you need a UV light, you should probably look for one that emits 365nm.

UV flashlights emitting at wavelengths of 365 nm or higher are less harmful than UV-B wavelengths because they emit in the UV-A range. In general, the amount of UV light emitted by a UV flashlight is much lower than what you would find outdoors on a sunny day.

These are ideal for a variety of applications, including UV curing, inspecting bathrooms and bedrooms for stains, and cleaning carpets for pet stains. Our UV LEDs and black lights are made of a strong aluminum alloy. For our UV lights in the 365nm and higher wavelength ranges, we use only pure professional LEDs.

Are black lights harmful to your health?

There are numerous reasons to select a 395 nm light. Because of their long throw, these are ideal for stains such as pet urine and our IFWA-C0 Cancun Clear Blue UV inks. Furthermore, some stains can only be seen at 395 nm, while others require 365 nm. Scorpion hunting is also best at this wavelength.

In lighting, what does nm stand for?

The wavelength of light is used to quantify it (in nanometers). The Greek symbol is commonly used to represent it. The wavelengths of visible light are typically defined as 400–700 nanometers (nm), or one billionth of a meter.

In conclusion, we have not only provided some significant information to compare 365nm vs 395nm, but we have also provided answers to some frequently asked questions. We hope this post has provided you with some useful information to assist you in selecting the appropriate wavelength. Thank you for your time.